Harrington returns to the winners circle with Wilson Staff

Three-time Major champion Padraig Harrington produced a masterclass with his Wilson Staff Infinite putter to capture his second Honda Classic title in a decade and gain another opportunity to triumph at Augusta when faced with a 15-foot birdie clutch putt on the final hole yesterday.

The putter, which entered his bag seven months ago and helped him to the 29th international title of his career at the Indonesia Open, had earlier shown its value to the popular Irishman when he rolled in four consecutive birdies over the back nine of the punishing PGA National course to pick up 3.20 strokes on a quality field and qualify for a play-off with rookie Daniel Berger. It also included a 34-foot birdie on the 12th hole that was one of 18 birdies Harrington recorded during the weather-affected tournament in taking the title he first won in 2005. 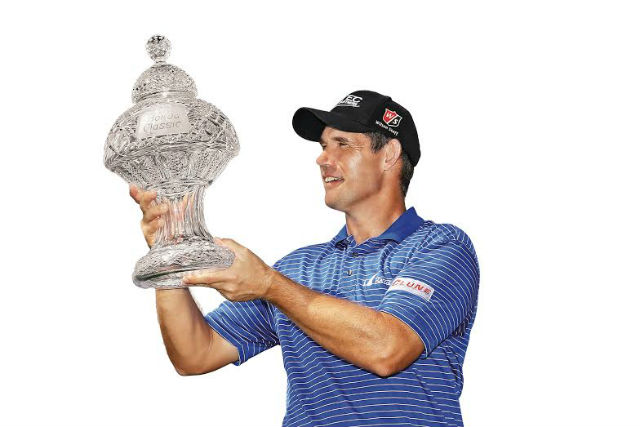 "My putting has brought a lot of confidence to my game...and thanks to the Infinite putter I feel more comfortable on the greens," said the Dubliner who plays with the centre-shafted South Side model now available to all golfers in the UK and Ireland. "I holed a six-footer at the 9th so pure that it gave me great confidence when I stood over every other putt on the back nine," he added.

Harrington, who plays the Wilson Staff FG Tour V2 irons (5-PW) as well as FG Tour V2 utility irons and FG Tour TC wedges, also used his 5-iron to put the ball to within four feet on what proved to be the decisive play-off hole at the intimidating par-3, 17th.

"It's great to see Padraig winning on the PGA Tour again and proving how well he and the Wilson Staff clubs can perform under intense pressure," said Doug Wright, Global Commercial Director at Wilson Golf. "The belief that we have in each other – something that's developed over the past 17 years since he signed to play Wilson Staff clubs – has been rewarded once again with another impressive performance in demanding conditions against a world-class field," he added.

The $1,098,000 prize money at Palm Beach Gardens pushed Harrington's career earnings on the PGA Tour to more than $23.5m since he teamed up with Wilson Staff in 1998. He re-signed for the famous manufacturer just two months ago and, as a valued member of the brand's Advisory Board, he has contributed to the development of today's range of Wilson Staff clubs, including the latest D200 family of driver, fairway woods, hybrid and irons.

For more information about Wilson Staff and the clubs used by Padraig, visit www.wilson.com.