Wilson Staff, the brand with more Major wins with its irons (61) than any other, has signed talented PGA Tour player Troy 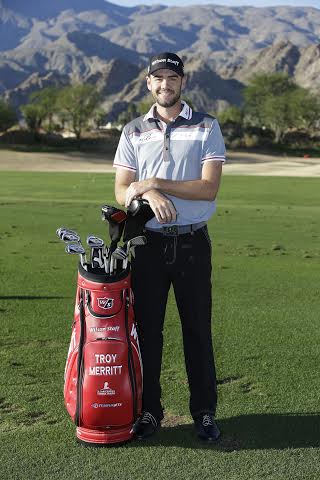 Merritt on a deal that will see the 29-year-old play the latest FG Tour V4 irons and FG Tour TC wedges.

Merritt first put the Wilson Staff FG Tour V4 irons into play at the recent Sony Open in Hawaii, where three rounds in the 60s put him in contention on the final day’s play. Wearing the brand’s famous logo on the front of his cap, the former Mexico Open champion will now put his new clubs into the distinctive Wilson Staff Tour bag for the rest of the PGA Tour season.
“Tour players talk on the range, and I heard from other Wilson Advisory Staff members that the Wilson innovation team delivers outstanding product and service,” said Merritt, who once beat the likes of Rickie Fowler to claim the $1m Kodak Challenge – a contest played over 30 designated holes at different PGA Tour events throughout the year. “I wanted to select a company that I will grow with, and that will grow with my game,” he added.

For more information on Troy Merritt’s Wilson Staff FG Tour V4 irons, go to www.wilson.com. The clubs are available at a RRP of £549, while there are also FG Tour V4 utility irons (2, 3 & 4-irons with an adjustable weight in the sole) on offer too, with a RRP of £119 each.