In a new weekly Golfshake feature sports writer Derek Clements previews this week's European Tour event in Dubai as well as providing some additional tips and information for any fantasy golf or betting tips and finally wraps up with some additional facts and analysis for the Dubai Desert Classic.

Stephen Gallacher attempts to write a piece of European Tour history when he goes for a third successive victory in the Dubai Desert Classic. The Scot, who made his debut for Europe in the Ryder Cup last year mainly on the strength of successfully defending his title 12 months ago, has been in good form in the Middle East. He identified his putting as an area that had to be improved upon and hired the services of Dave Stockton during the winter. The American is widely regarded as The Man when it comes to putting.

Last year, Gallacher played the back nine in nine under par during the third round and it was that astounding performance that set up his win. Gallacher is a quiet man and people tend to underrate him as a result but make no mistake, he is a determined and formidable performer and I believe he is a cast-iron certainty to finish in the top 10.

The list of winners in Dubai reads like a who's who of world golf - Tiger Woods (twice), Ernie Els (three times), Seve Ballesteros, Henrik Stenson, Colin Montgomerie, Jose Maria Olazabal, Fred Couples and Miguel Angel Jimenez. Oh yes, and in 2009 it was the first tournament won by a certain Rory McIlroy. 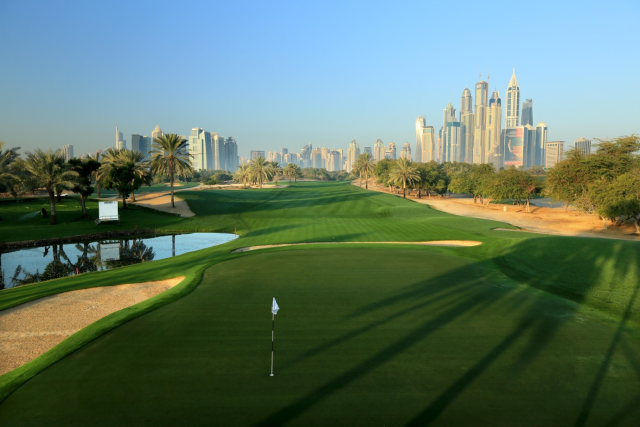 The first winner was Mark James, back in 1989.  The winner this year will collect more than £265,000 and the event has attracted a fabulous field. The first man to achieve a hole in one at the par three 15th hole will walk away with a gleaming new Mercedes - and there have been plenty of aces here over the years. 24, to be precise.

McIlroy makes his second outing of the year, after finishing second in Abu Dhabi despite struggling with his putter throughout the week and with his driver at various times. The world number one has moved up in class over the past 12 months, and that is a frightening prospect for his rivals. He could dominate the game in the same way that Woods did for so long. He also happens to have very fond memories of Dubai, having won here when he was just 19 years old for what was his maiden triumph on the European Tour.

He seems to have discovered a consistency that was missing from his game and has found a way to contend no matter how he is playing. McIlroy knows how popular he is and nothing gives him him a bigger kick than going off on one of those incredible bursts of scoring for which he is becoming famous, with the crowd cheering him every inch of the way.

He will be joined by Martin Kaymer, who led by 10 shots in Abu Dhabi during the final round and eventually finished third after a meltdown. It will be fascinating to see how he copes if he should find himself in contention again. No matter how good you are, strange thoughts are certain to get into your head if you find yourself in a similar position, waiting for the wayward drive, the missed short putt. Kaymer has won two majors and is the US Open champion but trust me, he is just as vulnerable to the thought processes as the rest of us.

Many players struggle the week after winning. Branden Grace is not such a player. Although he only won the Qatar Masters by a shot, he looked extremely comfortable in doing so. It was his second victory of the season and his sixth in all. He may well turn out to be McIlroy's biggest challenger.

If you are looking for an outsider, there are four young tyros to keep an eye on. Matt Fitzpatrick will be looking to continue the impressive start he has made to his professional career, and keep an eye on Andrew Johnston, who won the Challenge Tour order of merit last year. Tyrrell Hatton, who enjoyed a memorable rookie season, is looking to kick on.

Of all those looking for their maiden victory, the one who stands out for me is Eddie Pepperell, a 24-year-old Englishman who plays golf with a smile on his face. After a sluggish start to his European Tour career last year, he finished the season with six top 10 finishes, and he was fourth at the Qatar Masters. Furthermore, he has played eight competitive rounds this year and his worst score is a 72.

Ernie Els has played 13 times in the Omega Dubai Desert Classic over the Emirates course. In that time he has recorded three victories and nine top threes. His first 11 appearances yielded 11 consecutive top eight finishes. Of his 48 rounds on the Emirates course he is a total of 169 under par, with a stroke average of 68.48. He set the current course record of 61 (-11) on the opening day in 1994, which contained a European Tour record of 12 birdies in a single round. He has broken par in 43 of his 48 rounds.

The Majlis course will be used for the 24th time out of the 26 Omega Dubai Desert Classics’ including this year. The only years it went away from this course was in 1999 and 200, when the Dubai Creek Golf and Yacht Club staged tournament

No fewer than 18 players in this year’s line-up have won European Tour events in the Middle East. Ernie Els and Henrik Stenson have won the most with four apiece.