Nike issues athletes with Dri-FIT apparel for the USPGA

Nike Golf athletes will aim to stay cool as they battle the Louisville heat at the 2014 PGA Championship. Wearing Nike Dri-FIT fabrics that promote cooling, the Fall 2014 Nike Golf Collection will help keep the athletes cool in a colour palette of hyper brights.

Tiger Woods, the four-time PGA Championship winner, will compete in ultra-lightweight polos from the Tiger Woods Collection, that emphasise stretch and ventilation. Woods will rely on laser perforation in all of his polos to allow for more breathability in the areas that need it most, under the arms, along the upper back and under the collar.

Rory McIlroy will stay cool in his classic Lightweight Innovation Colour polo featuring hyper bright colors such as Hyper Grape and Hyper Cobalt, complemented by grey pants. He will also stay cool in the Innovation Two-colour Jacquard polo that utilizes a new jacquard technique called Racheltronic. This technique provides a seamless transition from solid jersey to mesh construction. Nike has added a burst of energetic colours to McIlroy’s flat bill hats to tie together his modern look.

“We know it’s going to be hot and muggy at Valhalla, so we focused on keeping our athletes cool and comfortable in the heat of competition,” said Merritt Richardson, VP of Global Golf Apparel and Footwear. “Through techniques like Racheltronic jacquard, laser cut and bonded mesh panels through the underarm, laser perforated collars and laser perforation at the upper back, we are providing our athletes with cooling innovations that will allow them to focus on playing their best.” 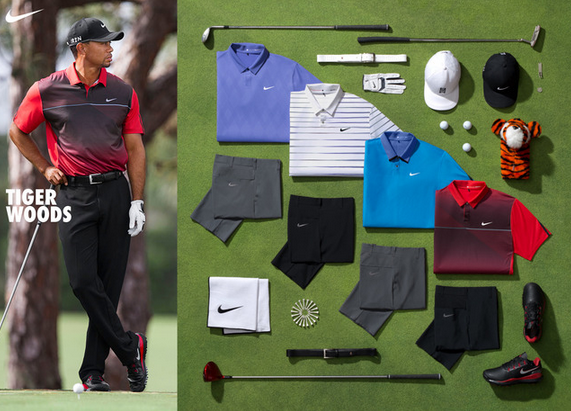 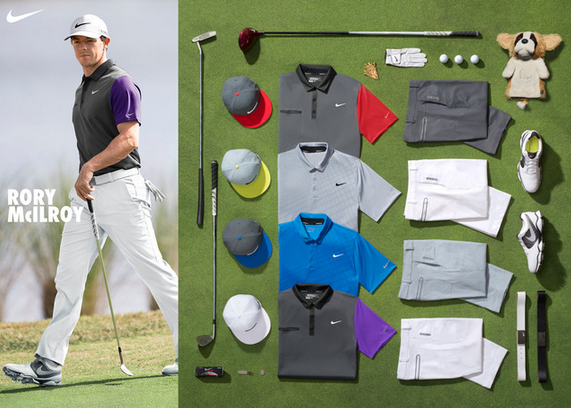 Wearing bold colours throughout the week, Brown will sport deep jewel toned hues as he battles at Valhalla. He bookends his competitive rounds in Purple Haze colour wearing the Key Embossed Polo on Thursday and the Nike Victory Stripe Polo on Sunday. Brown will sport the Lightweight Nike Innovation Stripe Polo in Photo Blue on Friday and the Nike Victory Polo in Action Red on Saturday. He will pull his looks together with the Nike Lunar Control footwear and the Nike Tour Mesh Cap. Driver and ball: Nike VRS Covert 2.0 and Nike RZN Platinum.

Competing for his first major victory, Chappell will coordinate his apparel with the new Nike Lunar Waverly footwear throughout the week. The court-inspired footwear has integrated traction for on course performance with off-course function and style. Keeping cool in the southern heat, Chappell will wear the following during competition: Key Iconic Polo 2.0 on Thursday, Sport Stripe Polo on Friday, Sport Seasonal Polo on Saturday and the Nike Speed Print Polo on Sunday.  He will top off his stylish looks with the Nike Tour Mesh cap. Driver and ball: Nike VRS Covert 2.0 Tour and Nike RZN Platinum.

Accustom to the warm temperatures of the South, Henley will be searching for his first major championship clad in a colour palette of Photo Blue and white mixed with pops of Volt. On Thursday and Saturday Henley goes solid with the Nike Ultra Polo 2.0 in white and black respectively. On Friday and Sunday he mixes it up with stripes in the Nike Victory Stripe polo and the Key Bold Heather Stripe polo both in Photo Blue. Henley will complete his looks with the Flat Front Tech Pant, Signature Swoosh Logo Cutout II belt, Tall Tour visor and Nike Lunar Control footwear. Driver and ball: Nike VRS STR8-FIT and Nike RZN Black.

Molinari will beat the heat in lightweight Dri-FIT styles and light colors at Valhalla. Confident in purple, he will wear the Nike Ultra Stripe Polo on Thursday and the Key Iconic Polo 2.0 on Saturday, both in Purple Haze. On Friday, Molinari will wear the Nike Ultra Polo 2.0 in white paired with Photo Blue Flat Front Tech Pants. On Sunday, he will wear his preferred final round color, Yellow Streak, in the Nike Victory Polo Molinari will lace up in Nike iD TW ‘14 footwear designed to coordinate with his outfits and pair each polo with the Flat Front Tech pant, Nike Tour Mesh cap, and Signature Swoosh Logo Cutout II belt. Driver and ball: Nike VRS Covert 2.0 and Nike RZN Black.

Trying to make his second win of the season a major championship, Noh will wear stripes and bold graphics in Purple Haze, Riftblue and Magnet Grey colors at Valhalla. He will start the week in the Nike Ultra Polo 2.0 in Purple Haze on Thursday. Stripes come into play the rest of the week for Noh with the Sport Nike Innovation Pocket Polo on Friday, the Sport Stripe Polo on Saturday and the Nike Ultra Stripe Polo on Sunday. The Modern Tech Pant, Nike Tour Mesh Cap Signature Swoosh Logo Cutout II belt and Nike Lunar Control footwear will finish each look. Driver and ball: Nike VRS Covert 2.0 and Nike RZN Platinum.

Always making noise in his head-to-toe looks, Olesen will sport camouflage Thursday through Saturday at Valhalla. He will wear the Sport Seasonal polo, which has a camouflage pattern in the iconic 26-degree Nike chevron for the first round; and the Sport Nike Graphic Polo, which has an all over camouflage graphic for round two. Olesen will wear camouflage on his trousers with the Sport Novelty Pant in black on Saturday paired with a black Sport Swing Movement polo with pops of Volt in his Nike Flat Bill Tour cap and his Nike Lunar Control footwear. On Sunday, Olesen will be wearing his colour of choice for the final round, Pro Green, in the Nike Victory Polo. Driver and ball: Nike VRS Covert 2.0 Tour and Nike RZN Black.

Coordinating his hyper bright colours, Watney will wear the Nike Innovation Speed Stripe Polo in black with pops of Volt on Thursday and that same polo in white with pops of Photo Blue on Saturday. Relying on Dri-FIT fabrics head to toe throughout the week, Watney will wear the Nike Speed Print Polo on Friday and Sunday - pairing them with the Flat Front Tech Pant, Nike Tour Flat Bill cap and the Nike Lunar Control footwear. Driver and ball: Nike VRS Covert 2.0 and Nike RZN Platinum.