Michelle Wie captured her maiden major title at the US Open. It will mark, for many the fulfilling of a great talent that for 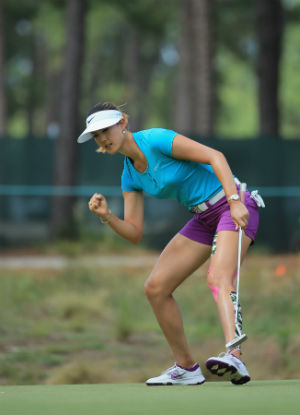 so long looked as if it would never come to fruition

Wie powered her way to a two-shot victory at the U.S. Women’s Open, capturing the first major championship of her career at Pinehurst Resort and Country Club. The 24-year-old notched her second LPGA Tour win of the year – and fourth of her career - with a final score of 2-under-par 278.

Wie celebrated her major milestone on the 18th green with her fellow LPGA athletes, who doused her in champagne.

“I had a lot of fun today, I woke up so excited. I am just so grateful for the opportunity,” said Wie. “I got a lot of goose bumps walking up to 18. I can’t believe this is happening.”

The win gives Wie eight top-ten finishes this season, moves her from 11th to a projected seventh in the World Rankings, and she now tops the LPGA Tour Official Money List.

Michelle Wie - In The Bag