The TP Tour Series is in its 4th season and has had an impressive list of early season winners at great golf courses.
TP Tour is the fastest growing Tour in the UK, having staged over 90 tournaments throughout England since 2011.

Farmfoods were the title sponsor of the TP Tour event at Robin Hood Golf Club in Solihull, Birmingham on May 22nd. Spectators were treated to a feast of golf from many top names – the field contained former Ryder Cup players David 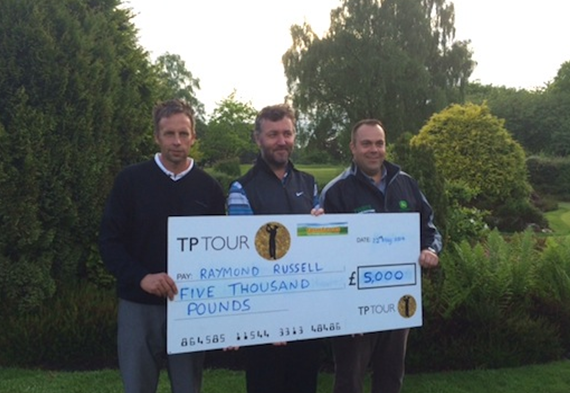 In a unique format, for the first time in British Professional Golf, the tournament format was shotgun start, with the top four contesting a final shootout, strokeplay over the final three holes.

The golf course was presented in immaculate order, winning praise from all competitors.

A few pros even said it was the best conditioned course they had ever played on, anywhere, with amazingly smooth and fast greens. Robin Hood has recently invested in John Deere equipment.

Seven European Tour winners were in the field, aswell as local pros and TP Tour regulars.
The event also featured live scoring with a scorer with each group recording scores.

Former Portugese Open Champion Van Phillips was the leader after the 18 hole stage, with an excellent round of 68, four under par.

Conditions were tough, with heavy rain falling most of the day.

The course coped well considering the conditions, and play resumed for the 3 hole shootout, with Phillips joined by Raymond Russell, Adam Gee and Simon Lillly.

Russell clinched the title and the winners cheque of £5,000 holing a great putt of some 25 feet on the final green!

The event was filmed and will be shown in the summer, further details will be announced on future TP Shootout events.
The Tour would like to thank its partners - Robin Hood GC, Golf Score live, See More Putters, Farol Ltd John Deere, and Farmfoods UK.

The next TP Tour event - Blackmoor GC, Wednesday 28 May