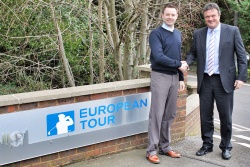 FootJoy have announced that it has extended its partnership with The European Tour as its Official Footwear Supplier until 2018.

Following the success of the initial agreement, which has gone from strength-to-strength since 2008, the new contract will encompass a variety of mutually beneficial brand-sharing and marketing elements.

Speaking on behalf of FootJoy, the company’s Sales & Marketing Director, Richard Fryer, commented: “We are immensely proud of the relationship we have developed with The European Tour over the past seven years, so naturally we are delighted to extend this association. We are certainly looking forward to working closely alongside their team over the next five years, as both organisations continue to lead from the forefront of the industry.”

This latest agreement with the European Tour follows an earlier deal with Ryder Cup Europe, which will see FJ become an Official Licensee of the biennial tournament when Europe attempts to defend its title against the United States at The Gleneagles Hotel from September 26-28, 2014.

“As the clear #1 Shoe brand of choice week-in-week-out amongst competitors on The European Tour, we also wanted to extend our support to everyone on the Tour from the agronomy & event staff to referees and officials – all of whom play crucial roles in enhancing the all-round appeal and credibility of the FJ brand,” added Fryer.

Tim Shaw, Sales Director for The European Tour, said: “Our relationship with FootJoy as an Official Supplier has been overwhelmingly positive. I think the fact that both parties have agreed to extend the partnership says everything about the level of satisfaction with our agreement which we hope will continue long into the future.”