"Golf needs a dominant figure. Basketball has LeBron James, tennis has has Roger Federer, we have had Tiger, but we need somebody else to step forward. Fans like to watch a dominant sportsman."

WE WATCHED in awe 17 years ago as Tiger Woods came, saw and conquered Augusta, breaking scoring and age records for fun. He was a breath of fresh air.

The American would go on to win 14 majors before his body started to protest. Just last week, before the 2014 Masters got under way, Rory McIlroy made it clear that golf needed a new Tiger. Of course, he had himself in mind. It didn't quite work out, but more of that later.

Instead, Bubba watson won his second Masters in three attempts. We think of Bubba as all raw power and ungainly swing. But the 35-year-old is an artist, and he left his delicate brush strokes all over Augusta. Yes, he thrashed a 366-yard drive down the par-five 13th - and while many will argue that was the shot that won him his second Green Jacket, what about the magnificent iron shots that brought his birdie twos on the front nine? What of the wondrous up-and-downs? Or what about that simply sensational bunker shot at the seventh? The ball was plugged, but he somehow managed to apply a feather-light touch and still get the ball out of the sand and persuaded it to gently roll up the slope and back towards the hole. It was the shot of a genius. 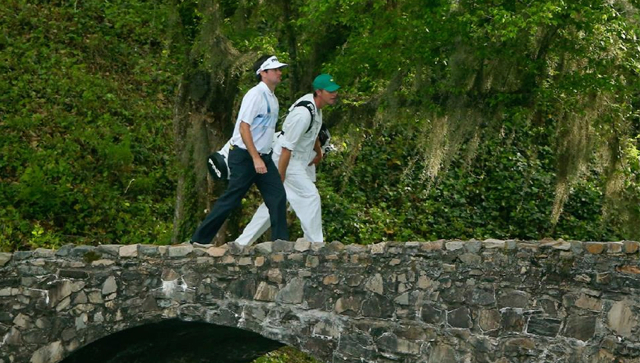 And for all those looking for the next Tiger, well we got that too. Jordan Spieth, may I remind you, is just 20 years of age. He won his first PGA Tour aged 19 and contends almost every time he plays. He plays too much, but that will change.

In the meantime, he demonstrated a game that will win 10 majors at least before he is done. Had he been here before, he would have played a different tee shot to the 12th and would not have ended up in the water. That was a schoolboy error. The putt with which he saved his bogey was the shot of a champion.

Instead of hitting a 40-yard hook out of a forest of Georgia pines - the key shot in his playoff victory two years ago  the final act for Bubba this time took place on the 18th green. Watson had a three-shot lead and consulted with his caddie on a 15-foot birdie putt.

“I went over to him and I said, ‘I’m not very good at math, but we’ve got four putts, right?”’ Watson said.

Watson kept his poise during an early burst of birdies from Spieth, turned the tournament in his favour with consecutive two-shot swings to close out the front nine, and coasted to a 3-under 69 to win The Masters by three from Spieth and Jonas Blixt of Sweden.

Watson made it look routine over the final hour. On a day when Spieth was trying to become the youngest winner in Masters history and 50-year-old Miguel Angel Jimenez had a chance to become the oldest major champion, Watsonjoined an elite group as the 17th player to win multiple Masters.

Surprisingly for Augusta, the most compelling action was on the front nine. Watson's  only nervous moment was that drive around the corner on the 13th hole, which clipped the trees and still travelled 366 yards, leaving just a sand wedge into the par five. That was his lone birdie on the back nine. No one got closer than three shots the rest of the way.

“The shot out of the woods made me famous,” Watson said. “But this one was a lot better for me and my nerves.” This was nothing like The Masters he
won two years ago, especially when it was over.

His wife and newly adopted son were home in Florida in 2012 when Watson made four straight birdies on the back nine and won on the second playoff hole with his great escape out of the trees. When he tapped in for par on 18, there was 2-year-old Caleb walking towards him. Watson had tears streaming down his face when he scooped him up, a prize as great as the green jacket.

“Seeing him back there ... what an amazing feeling as a parent,” he said. “And then throw on the green jacket on top of it just changes everything.”

After high-fiving the crowd on his way to sign his card, Watson returned to the Butler Cabin to take back that green jacket after slipping it on Adam Scott a year ago.

“After giving it away last year, I wanted it back,” Watson said. “I told Adam we could just swap it back and forth every year.”

Spieth could only watch from the side of the green.  He dazzled the massive crowd early by holing out for birdie from the front bunker on No. 4, and making back-to-back birdies to build a two-shot lead through seven holes. Bidding to become the first player in 35 years to win in his first try, Spieth looked to be well on his way.

But he three-putted for bogey at the eighth - the first six on his card all week - as Watson got up-and-down for birdie to tie for the lead. Spieth then made a rookie mistake, leaving his approach below the flagstick on No. 9 and watched it roll back into the fairway, setting up another bogey and two-shot swing.

Whatever prayer he had ended at Amen Corner.  His tee shot on No. 12 found Rae’s Creek. He missed a short birdie attempt on the 13th.

Watson was too powerful, too experienced, too tough to beat. Spieth closed with six pars for a 72 and tied for second with Blixt, who never went away but never really threatened. Blixt shot a 71.

“Obviously, I’ve worked my whole life to lead Augusta on Sunday. And although I feel like it’s very early in my career, and I’ll have more chances, it’s a stinger,” Spieth said.

Jimenez, the ageless wonder from Spain, shot 71 and finished alone in fourth. Matt Kuchar lost a share of the lead with a four-putt double bogey on the fourth hole and never challenged again. He closed with a 74 and tied for fifth with Rickie Fowler (73).

Nine players were separated by three shots at the start of the final round only for this to turn into a two-man show. For the opening two hours, it was anything but dull.

After trading pars on the opening hole, either Watson or Spieth - sometimes both - made birdie or bogey over the next nine holes.

Watson's second victory of the year puts him at the top of the Ryder Cup standings.

He was guided all week by a simple game plan of hitting fairways and greens, and he was calmed by knowing that regardless of how it turned out, he still had a green jacket. Now he has two of them.

And Rory? Well the double major winner shot a final round of 69, that could and should have been even better. Three of his four rounds were under par. His second round added up to 77 strokes - without that disaster, he would have been in contention. But every time he has come to Augusta, there has been at least one round of 77 or worse.

Lee Westwood finished tied eighth. Nobody played better from tee to green. Sadly, Westwood is still cursed with the coldest putter in golf.