Fitzpatrick's caddie barred from carrying at The Masters

MATT FITZPATRICK, the British teenager who won the US Amateur championship, last year, waxed lyrical about Augusta as he prepares for his Masters debut, but then got a taste of the other side of life at one of the most exclusive golf clubs in the world.

Lorne Duncan, his caddie, has to wear sandals owing to a medical condition. But the men in the green jackets at 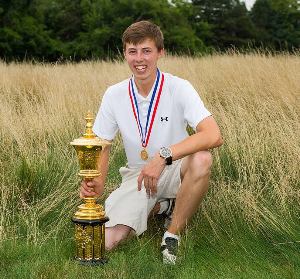 Augusta decided that no sandals were allowed.

Duncan was livid and tweeted: "I told the TD (tournament director) he was pathetic and I hate the place. Apparently aesthetics are more important than people." His place will be taken by Northern Irishman Ricky Elliott, who caddies for American Brooks Koepka.

Sheffield United fan Fitzpatrick must put that behind him, along with the disappointment of missing his team’s FA Cup semi-final if he makes the cut on his Masters debut this weekend.

But the 19-year-old can console himself with a trip to Wembley for the final if the Blades beat Hull on Sunday. Life has changed forever for the amateur. "I’ve been  invited, if they make it to the final, by Justin Rose,” Fitzpatrick said. “Hopefully I’ll be able to take him up on that, but we’ll see.”

Fitzpatrick insists he has not been looking up flight schedules for Saturday morning in case he does miss the cut and is focusing on making the most of his experience.

As well as playing with US Open champion Rose last week, the teenager was invited to practice with former world number one Rory McIlroy on Tuesday and, as US Amateur champion, will partner defending champion Adam Scott and US PGA champion Jason Dufner in the first two rounds.

“I don’t think there is anything more amazing,” said Fitzpatrick, who was the leading amateur in The Open at Muirfield last year before becoming the first English winner of the US Amateur since 1911 a month later.

“The course and the place itself is just fantastic. There’s nowhere in the world like it.

Playing with Rory at 9.15 in the morning, the crowd was massive, that was something new in a practice round for me, and to play with one of the best golfers in the world is incredible.

“I couldn’t speak more highly about him. He was really helpful and would answer any questions I would ask him. His caddie asked if I wanted to play with him and it was a yes straightaway.

“The main thing he said to me was make sure I enjoy it. He said it’s tough not to get too caught up in everything, but you’ve just got to look around and put things into perspective and see where you actually are and just enjoy your time. For me, this could be once-in-a-lifetime so I’ve got to enjoy it while I can.

“I can’t say I’m looking to feel like I can win it, not playing with the guys I played with today, anyway! My aim is to just make the cut and push on from there really.”

Playing partner Scott remembers being in Fitzpatrick’s shoes. “For me, I got to play my first two rounds ever with Fuzzy Zoeller in the tournament, so he was whistling  off the first tee,” Scott joked. “I wasn’t quite sure what to make of it, but it was certainly a little more light-hearted than I thought.

“Unfortunately for Matthew, I’m not going to be whistling off the first tee so he’ll have to find another way to calm down. I think he’s just got to enjoy the experience and hopefully it inspires him to keep working hard and come back many, many times.”