The Walrus and the Smallrus loving life at Augusta

CRAIG STADLER is ready for “a very, very cool” experience at this week’s Masters where he and his son, Kevin, will become the first father-son duo to compete together in the season’s opening major.

Kevin Stadler made it possible when he won his maiden PGA Tour title at the Phoenix Open in February, and just in time 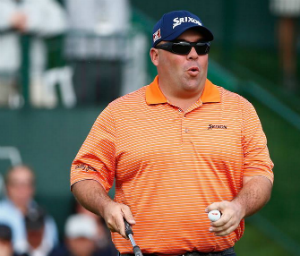 with his father planning to make his final appearance at Augusta National this .

“I can’t think of a better way to do it (make his Masters swansong) than playing with your son in the same tournament,” said former champion Craig, with his son sitting by his side.

“It’s awesome. This is a very, very cool thing, and thanks to Kev here, I got back to the interview room for the first time in about 20 years. I haven’t been here since it was built, I don’t think.”

Stadler, who won the 1982 Masters along with 12 other titles on the PGA Tour, has taken great satisfaction from watching his son develop.

“I’m so proud of the way he’s played the last three, four years,” said the 60-year-old, who is nicknamed “The Walrus” because of his portly build and moustache.

“He has been close to winning a zillion times and finally got it done, so this will be a very special week. I’m just going to be out there slashing around, trying to make the cut, and he’s going to be trying to win the golf tournament. It’s going to be a wonderfulweek for us.”

Stadler Jr, popularly known on the PGA Tour as “The Smallrus,” relishes the prospect of competing in his first Masters along with his father.  “I’m incredibly excited to be here and to play, and it’s going to be really, really fun to be on the inside of the ropes,” said the 34-year-old.

“I feel like I know this place pretty well but I’ve never, ever played it in competition. So it’s going to be a blast. I just don’t really know what I’m getting myself into but it’s going to be really enjoyable.”

Asked when he first realised the significance of his father’s Masters victory, Stadler replied: “I was two years old when he won it, so he was always Masters champion when I was a kid.

“It was just kind of a tag line that he earned when I was too young to recognise it. And obviously it was cool for him to be able to come here and play for as long as he wants the rest of his life, that’s pretty special.”

Stadler Jr, who won the European Tour’s Johnnie Walker Classic in Australia in 2006 and four titles on the lower-tier Nationwide Tour, has fond memories of watching his father compete at Augusta National. “It was great for me to be able to tag along and walk around here,” he said. “I couldn’t wait for April every year, when I was a kid, to come out here and just run rampant around the golf course. It was what I got the most enjoyment out of when I was a kid.”