Sports Marketing Surveys INC have announced the outcomes of the 2013 Golf Participation report, following the seventeenth year of a comprehensive examination of the British golfer, and their playing habits.

Despite positive signs throughout a warm, dry summer and with no distinct other sporting distractions such as the Olympic Games in 2012, a devastating first quarter (32% down on 2012) resulted in the number of rounds played in 2013 being at its lowest in over a decade. 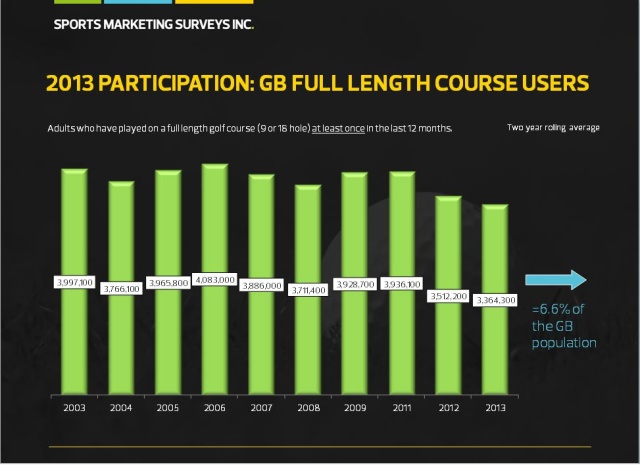 In line with this are SMS INC.’s participation figures that show GB lost close to 150,000 golfers over the last year, signifying the first time that overall participation has dipped below 3.5 million golfers in the last ten years.

Although 2013 was evidently another difficult year for the golf industry, SMS INC.’s study exposes positives, and opportunities for the sport to grow.  The number of ‘Avid’ golfers (who play at least once a week on average) actually increased in 2013 by nearly 89,000 players.

The decline in golfer numbers is primarily due to the loss of around 156,000 ‘infrequent’ golfers, who play less than 12 times a year. After the disruptions caused by the weather and sporting events in 2012, it seems that these golfers have not yet made it back onto a full length course.

Conversely more golfers used a driving range and a par 3 course in 2013 than 2012, thus offering signs that these golfers are ‘coming back’ to the game by making use of arguably more practical, less time-consuming facilities.

“Whilst the die-hard golfers will fight tooth and nail to play, infrequent golfers, many of whom have several demands on their time, make their decision as to whether golf will be a part of their year very early so it is the challenge of the industry to ensure clubs are dusted off considerably before the Masters.”

SMS INC.’s participation report also analyses participation of other similar sports such as tennis, cycling, running and football in comparison to golf. The report shows that cycling and running are the most played sports in the UK highlighting the need for the golf industry to demonstrate the accessibility that certain golf facilities such as the driving range, pitch and putt and par 3 courses can offer.