SCOTLAND'S Stephen Gallacher made a bit of golfing history when he recovered from the depths of despair to become the first man to successfully defend the Omega Dubai Desert Classic. 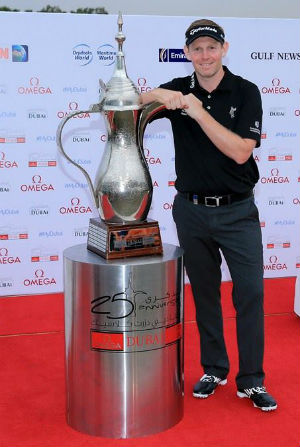 But what a difference a day made for 39-year-old Gallacher and the chasing pack. His third round of 63 saw him play the final 10 holes in an astonishing 10 under par. But his final round could hardly have been more of a contrast, and it looked like he had thrown away his chances of victory before a remarkable finish that proved Gallacher might be a good man to have on your side come the Ryder Cup later in the year.

He began the final round with a two-shot lead but lost it after dropping shots at the first and second. Two more shots went as he reached the turn in a four-over par 39. At that stages he was two adrift and it seemed certain that he was going to finish among the pack.

His playing partner, Rory McIlroy, who began the week with a 63 and had looked to be back to his best, fared little better, playing the front nine in one over before dropping another shot at the 10th. His first birdie finally came at the 11th.

Meanwhile, it seemed that every other contender was reluctant to break from the pack and make a real charge at the title. Until Emilano Grillo of Argentina emerged, that is. He played the front nine in 33, then birdied the 16th and recorded a remarkable eagle at the final hole when he dropped a huge putt after his second shot had clattered into the hospital units and landed on the green, fully 65 feet from the hole. It meant he finished on 15 under par, and for a while it appeared that it might be good enough.

Brooks Koepka, the hugely promising young American, continued his steady play but dropped shots at the sixth and 11th holes proved his undoing. He came to the last needing an eagle to snatch the lead from Grillo and hit a glorious three wood into the green. Unfortunately, it was too long and finished in the bunker at the back. It left him a treacherous shot and he had to settle for a par, and a 14-under-par total, level with Frenchman Romain Wattel, who must surely secure his first victory before long.

Wattel matched Grillo's 66 thanks to a birdie-birdie finish.

So what of Gallacher? Birdies at the 11th and 13th steadied the ship, but victory still seemed to much to ask. Then he birdied the 16th and produced a wonderful pitch from thick rough to birdie the 17th and all of a sudden he was 16 under par and one in front.

He split the fairway at the final hole but was left with 270 yards to go and chose to lay up. His third shot, with a gap wedge, appeared to be perfect, but its backspin took it back to the front of the green. He left his first putt three feet short but knocked in the next for a par and a one-shot victory.

As he turned, his young daughter ran on to the green to hug her father, tears running down her cheeks. Most of his family were in Dubai to see Gallacher's title defence, and there were jubilant scenes. His 72 may have been nine shots worse than his third round, but the Scot had proved he could dig deep when required to do so.

McIlroy will look back on his week in Dubai with mixed emotions. He played some brilliant golf but his play in the final round showed that he still has some way to go to get back to his very best. He had just two birdies, but four bogeys in a poor round of 74 and finished in a tie for ninth place, four behind Gallacher.

And what of Tiger Woods? The week's star attraction finished on six under par after a final round of 70, but needed to birdie the final three holes to do so. Like McIlroy, he too has much to do.

Gallacher destroys the back nine in Dubai