Gallacher destroys the back nine in Dubai, leads by two

AFTER producing one of the best nine holes ever seen on the European Tour, Stephen Gallacher looks set for a 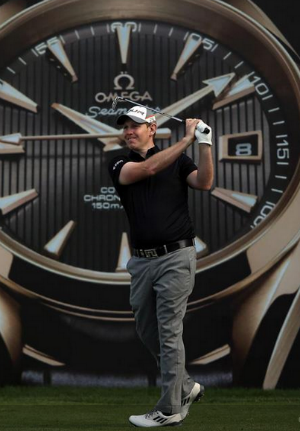 The Scot started the day five shots off the lead and there were no signs of the fireworks to come when he reached the turn in level par. But then he played the back nine in 28 shots, with seven birdes and an eagle. He shot a 63 and is on 16 under par after, two ahead of Rory McIlroy .

Behind him, the play of Brooks Koepka and McIlroy, who started the day in the lead, was made to look pretty ordinary.

From tee to green, Koepka was unimpressive, but he putted like a god, especially on the front nine. Whether it was for pars or birdies, it seemed to make no difference to the young American, although the highlight was a raking effort for birdie at the eighth which broke fully three yards from left to right.

Once more, McIlroy struggled all day long with his driving. He started well enough. Despite dropping a shot at the first, he came back with a birdie at the second and an eagle three at the third, and appeared to be cruising.

But then he started missing putts and stumbled to the turn in one-under 34, by which time he was trailing Koepka by a shot. A birdie at the par-five 10th put the pair back on level terms at 13 under par.

Koepka regained the lead when he birdied the 11th, McIlroy failing to convert a six-footer on the same hole.

Gallacher showed he wasn't going to give up his title without a fight. He was one over par for his round after eight holes, but then reeled off four consecutive birdies and an eagle from the ninth to move to 12 under. He parred the 14th but yet another birdie at the 15th meant he moved into a share of the lead.


Incredibly, Gallacher took the lead when he rattled home another lengthy putt at the 16th. Next up was the par-four 17th. Measuring 325 yards, there is a $2.5m prize on offer for anybody who can achieve a hole in one here, but the Scot came up short. However, he pitched the ball inches from hole and collected another birdie to go 15 under. Koepka birdied the 13th to trail by a shot.

McIlroy, meanwhile, was missing the fairway at the par-five 13th by fully 80 yards. Having announced to the world that he had found a driver he was happy with, the Northern Irishman now couldn't hit a fairway to save his life
.
Gallacher played a poor shot from the greenside bunker at the 18th, but then holed another 15-foot putt to complete his remarkable back nine.

Koepka fell back to 13 under when he failed to get up and down from a bunker at the 14th and repeated the mistake at the 15th to fall four behind Gallacher.

McIlroy finally got back on the birdie trail at the 17th and went to the 18th trailing Gallacher by two shots.

Steve Webster rocketed through the field with a 64 that included nine birdies and an eagle. The Englishman birdied the last three holes to get himself in the mix at 11 under.One shot better after a 65 was the gifted young Swede, Thorbjorn Olesen.

To celebrate the 25th anniversary of the tournament, the sponsors paid a fortune to bring Tiger Woods to the Emirates Golf Club, but the world No1 continued to misfire, his 70 taking him five under par and with no realistic chance of winning.

Another nice touch was to invite every past winner and Colin Montgomerie and Fred Couples have proved there is plenty of life left in the old dogs yet.