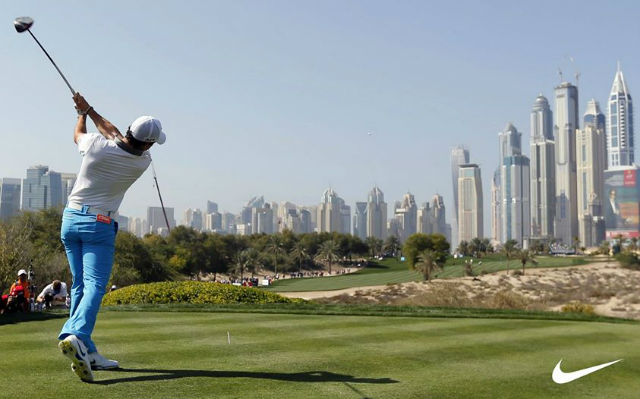 THERE was only one show in town when the Dubai Desert Classic got under way today - and it wasn't Tiger Woods.
The world No1 was part of the supporting cast as Roy McIlroy continued his return to form by kicking off the tournament with an opening round of 63. McIlory, newly-engaged and carefree for the first time in 12 months, produced a flawless 18 holes that featured seven birdies and an eagle at the Emirates Golf Club.

Playing with Woods and defending champion Stephen Gallacher, McIlroy led by three shots after the opening round. As for Woods, well he wasn't even second-best in his group, as Gallacher produced a 66.

Woods, who laboured to an awful 79 at Torrey Pines last week, insists that his A-game is not far away and anybody noting that he had scored a 68 would be forgiven for thinking that the 38-year-old American had played well. The truth is that he struggled throughout, missing fairways and greens. His score was built around birdies at the three par fives on the back nine.

He revealed that he has been working on a shorter backswing with coach Sean Foley due to the numerous knee operations he has endured over the years.

"I've always played my best from a shorter position," he said. "Looking back at my younger days on tour it as even shorter than it is now, the only difference is I can't wheel on it like I used to.

"I used to snap the knee at the end to get the power, if I did that now I'd destroy the knee just like I did before. That's one of the reasons why I've had so many operations on it."

Like Woods, McIlroy is a former winner of the tournament and knows that another victory would set him up perfectly for the season. "I played really well from tee to green, drove the ball well again; I think I only missed a couple of fairways and only missed one green where I had to really get it up and down.

"I took advantage of how I am driving the ball and just need to do more of the same the next three days. I am very close to being back to my best, obviously. This year I've shot a couple of good rounds. This is a little lower than I went in Abu Dhabi [where he finished second] and I feel very comfortable with my game."