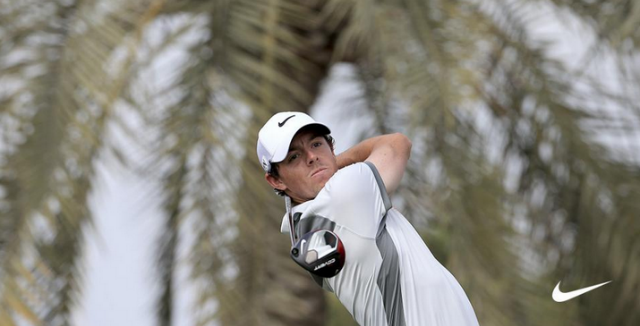 Rory McIlroy leads the way after two rounds of the Dubai Desert Classic, but boy did he make it hard for himself.

After his error-free opening round, the Northern Irishman found it much harder in round two, but a birdie at the par-five 18th ensured he goes into the weekend at the head of affairs.

Brooks Koepka, of the United States, finished the day one behind McIlroy off the lead after tearing up the Emirates Golf Club in 65 shots in a round that featured birdies at three successive holes. And it could have been even better. The young American finished with six successive pars to record a 36-hole total of 134, 10 under par.

Tiger Woods, the World No1, had been part of the supporting cast in the opening round as McIlroy continued his return to form by kicking off the tournament with 63. McIlory produced a flawless 18 holes that featured seven birdies and an eagle. His second round was a workmanlike 70.

Playing with Woods and defending champion Stephen Gallacher, McIlroy led by two shots after the first round. Woods had started with a 68, Gallacher with a 66.

Woods insists that his A-game is not far away but the evidence says something very different. He opened with a 68 and then laboured to a 73, during which he once again struggled with his driver and holed little of note.

He birdied the third and 11th holes, but dropped three shots and was one over par for the day after 17 holes. The 18th is a par five that should provide Woods with a shoo-in birdie, but he could only manage a par.

Initially, McIlroy's serene progress continued. Although he dropped his first shot of the week at the opening hole, birdies at the third, fifth, seventh and 10th moved him to 12 under par as he prepared to tackle the easiest part of the course.
But he dropped shots at the 13th and 16th and was tied for the lead on 10 under with Koepka until a birdie at the last saw him head for the clubhouse at 11 under.

For Woods, it was another ugly round. He birdied the third but dropped two shots and turned in one over par for the day. As he began the back nine in company with McIlroy, Woods trailed him by nine shots. The American's 73 leaves him on three under par.

Playing the course the wrong way round, Koepka birdied the 10th, 12th, 13th and 17th to be out in 33 and then birdied the first, second and third to go seven under for the day, and 10 under overall.

Danny Willet, who also fired a 65, Damien McGrane and Julien Quesne are next, on eight under. Gallacher is among a large group on seven under that also includes Henrik Stenson.