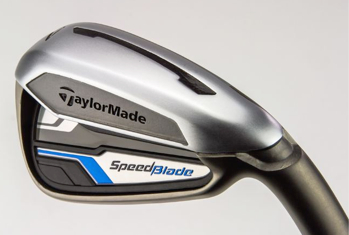 When I got in touch with my contact at TaylorMade to tell her that I would like to try out the new SpeedBlade irons, she told me that she and her team had just returned from a week in Portugal, where they had been testing the cubs, and signed off by telling me that the ball had been going miles.

Now, of course, you would expect her to say that, wouldn't you? The real proof of the pudding is in the testing though.

And boy, do these club pass the test. TaylorMade reckon that golfers of all standards will enjoy these irons. Let me tell you that I am a 12-handicap golfer, and consider mysef to be one of the better 12-handicappers, and I just adore them.

I am consistently amazed by TaylorMade's product range. But never before have I been so surprised by a set of irons. As you would expect, they are forgiving, which means that off-centre shots still fly really well. But it is when you strike the ball properly that you get the full benefit of the SpeedBlade technology - I normally hit a seven iron 150 yards through the air, but have added fully 10 yards with the SpeedBlade seven iron.

And don't listen to anybody who tells you that it is impossible to manouevre the ball with today's irons because it simply isn't true. I had no problems hitting it right to left or with a gentle fade.

The irons look great, combining a two-tone, satin nickel chrome plating with dark smoke satin iron plating. But the key to performance is what TaylorMade call  the Speed Pocket, a handle-bar shaped slot in the sole of the 3-7 irons that enables a large area of the face to flex and rebound at impact, resulting in faster ball speed, higher launch and better feel. The improved Speed Pocket has been widened and lengthened, giving golfers more face area toward the toe and heel, which is what promotes a high launch angle and strong ball flight. The Speed Pocket also features a cut through slot internally, which allows for more flex and rebound on the bottom part of the face.

The longer irons feature a thicker topline which help with confidence - you just stand over the ball and KNOW you are going to hit it well. The slender topline and sole in the short irons promote better workability, feel and control.

The Speed Pocket contains polymer and the major bonus with this material is that you never feel vibration going through your hands and wrists.

I am a TaylorMade fan (have been for years) and it is when I pick up a set of irons as good as the SpeedBlade that I know why. Try them out for yourself - you will love them.