The papers have been full of speculation that Rory McIlroy and Graeme McDowell have not been getting on. Certainly 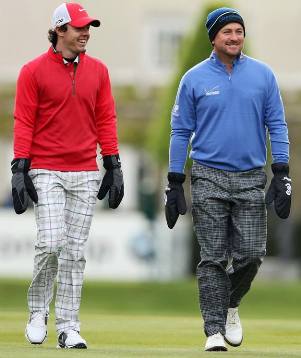 their relationship has become more difficult with the law suit that is underway between McIlroy and Horizon Management - The company that looks after McDowell's interests.

The fact that McIlroy was not present at McDowell's Bahamas wedding added fuel to the fire, but those flames looked to have now been doused by McDowell following a recent interview with the Irish independent.
This is what McDowell had to say on his friendship with Rory:
Of course we’re still friends,” said McDowell. “I’m inadvertently stuck in the middle of a legal matter. I’m very close to both parties and, of course, there’s going to be speculation about how that’s going to affect both relationships, which is a tough scenario.
“It’s tough for everyone, but Rory and I will always remain competitors, colleagues, peers and friends. I care a lot about what he does. I care a lot about how good he is and that will never change.”
He was also asked if European Ryder Cup Captain Paul McGinley had anything to worry about ahead of next years match at Gleneagles. McDowell said:
No. There’s not a problem there. I’d love to renew my partnership at Gleneagles with Rory, for sure. A big goal for me in 2014 is to be on that team, and I expect Rory McIlroy will be on that team.
“Would I like to be teeing off with him on Friday morning in the foursomes? Absolutely. I don’t think Captain McGinley needs to worry about that relationship.”
Sounds like good news for McGinley, who would be banking on the two teaming up as one of his lead pairings in 2014.

2014 A career defining year for McIlroy?