They could not be further apart right now, The World's no.2 and no.3 players have been preparing for the years final major in very different ways with Phil Mickelson confidence sky high and Rory left wondering where it all went wrong. 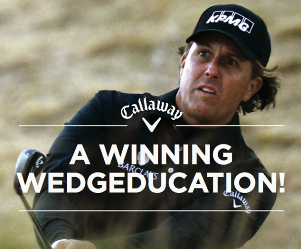 Reports suggest that Phil Mickelson will once again ditch both his driver and 'frankenwood' which is in effect a 2 wood in favour of his Open winning Callaway X hot deep 3 wood. This is fast becoming a trend for Mickelson and it may not be long before we some other players following suit.

Mickelson is likely to compensate for the lack of driver by playing 5 wedges at Oak Hill. When his coach Butch Harmon was asked about Mickelson's lack of driver he replied, "There's just no room for it"

The Oak hill layout measures just 7163 yards and is a par 70. That is 400 yards short of Firestones par 70 layout where Tiger Woods won so emphatically last week.

Meanwhile Rory McIlroy is still wondering what went wrong in 2013. A year ago he lifted the Wannamaker trophy winning the years final major by a record 8 shots, admittedly he did win the 2012 USPGA following a slump and 4 missed cuts, but this slump is deeper and longer. He is also struggling with technical faults and a new driver.

So what has he been doing to get himself geared up for this week? Well, he has been watching re-runs of last years event. In a press conference he told the gathered media exactly why he is watching the re-runs:

"I think technical things, for sure; you look at the way you're swinging the club,” he said. “But also, it's more than that; it's body language, it's how you carry yourself, it's all that sort of stuff, your little mannerisms. I guess it's just trying to just remember those feelings and remember how I felt that week and trying to carry some of that into this week and just get those good, positive thoughts going.”

He went on to say:
“You have to care about where the ball is going, but swinging it like you're giving it your all and ripping through the ball,” he continued. “Even walking between shots – and that's something I started to do last week again. I think everyone sees when I walk and I'm playing well, I have that little bounce in my step, so just trying to get that going again and trying to get that positive energy back.”
Check this short re-run of McIlroy's amazing victory at Kiawah Island in the 2012 USPGA:

McIlroy's form a mystery - even to himself