McIlroy slump a mystery...even to himself!

Another glorious day dawns over Muirfield, with all the talk revolving around Rory McIlroy's extraordinary press conference following his horrific opening round of 79. 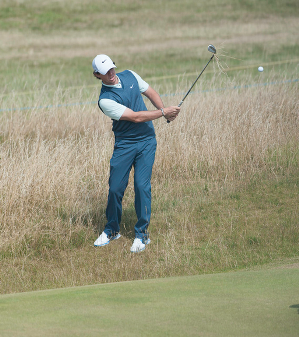 "It's not technique, it's not that I need to concentrate,but sometimes I feel like I'm walking around out there a bit unconscious."

He went on trying to explain exactly where he is with his game:

"I've got to try to think a bit more, I'm trying to concentrate. I can't really fathom it at the minute," he said.

"It's so brain dead. I feel like I've been walking around like that for the last month. It's being fully focused on each and every thing. It's something I've never experienced before."
He then went on to admit that he may be under thinking on the course and may in the short term need to see a psychologist in order to regain his focus.
There will be some executives at Nike who must be feeling very nervous about the comments made by their No2 player. Ever since signing for the brand, McIlroy has struggled, but they should take some heart from the fact that his 79 is not his worst round at The Open - he had an 80 in the second round at St Andrews!
On a rather more light hearted note, Graeme McDowell set Twitter buzzing last night with this tweet:

Me and @TigerWoods need a third for the morning. 944am off the first tee at Muirfield. Anyone fancy a knock? #TheOpen

Whatever happens today, it looks like it is going to be a cracker, with sun shining and little wind, there is a low score out there for someone!
If you are going to the Open, you may well be staying in Edingburgh. If so have a look out for the flaming piper that Golfshake writer Derek Clements spotted this week:
When they get fed up with watching golf, there is plenty to see and do in the city.

But surely one of the most bizarre sights is the Flaming Piper, who attracts huge crowds to see him play. Everytime he exhales, flames appear at the top of his pipes. You couldn't make it up! 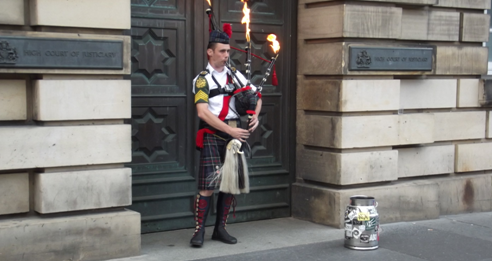