Wilson Golf, the iron brand with more Major wins (61) than any other golf club manufacturer, has teamed up with leading online retailer golfonline.co.uk to offer a Limited Edition set of Wilson Staff D-100 irons as The Open Championship at 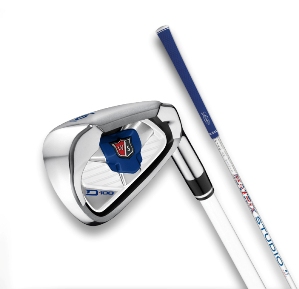 Muirfield gets under way this week.

The distinctive red, white & blue ‘British’ irons (4-SW) are the only available set in the UK and can be won by registering for free on www.wilsoncompetitions.co.uk from today until midnight on 28 July. Two tickets for the final day’s play at Muirfield are also available to another prize winner who registers before midnight on 17 July.
More than 2,000 golfers tried to win a green and yellow Limited Edition set of Wilson Staff D-100 irons produced to coincide with this year’s first Major back in April.
“These irons promise to be just as highly prized as the first Limited Edition set,” said Doug Wright, Commercial Director of Wilson Golf in Europe. “The D-100 has proven a big hit since it was launched in March, but these rare British-styled irons, along with a pair of tickets for the final day, will give two lucky golfers something special to remember from one of the world’s greatest sporting events.”
The famous brand – which has former Open champions Padraig Harrington and Paul Lawrie competing with its irons at Muirfield – is also offering another 100 prizes in the form of 3-ball sleeves of its new Wilson Staff Dx2 Soft golf balls, the softest distance model on the market.

New Wilson Staff Dx2 longer and softer than ever