Sports fans are being reminded that they only have one week left for the chance to get their hands on a ticket for The 2014 Ryder Cup at Gleneagles in Scotland. As one of the world’s premier sporting events, the match will be a sell-out but fans will miss out on a ticket if they have not put their name in the ballot by midnight, July 22nd.

There is also the chance for one lucky applicant to get the exclusive ‘Golden Ticket’, which will incorporate unique 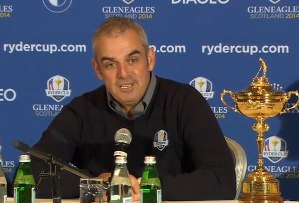 experiences, special access to private areas and exclusive privileges, while the winning applicant will also get their match ticket for free. European Ryder Cup Captain Paul McGinley will telephone the winner personally to break the news.
The 2014 Ryder Cup takes place over six days and encompasses three ‘Practice Days’ – Tuesday  September 23, Wednesday September 24 and Thursday September 25 – and three ‘Match Days’ – Friday September 26, Saturday September 27 and Sunday September 28.
European Ryder Cup Captain Paul McGinley said: “For a player, appearing at a Ryder Cup is the pinnacle of team golf, and you can see from the thrilling matches down the years just how it brings out the best in them. For a fan, therefore, the ‘Golden Ticket’ must be the ultimate way to enjoy the event. I think it’s a fantastic idea to enable someone to experience the best elements of The Ryder Cup.”
Golf fans eager to get their hands on a highly-prized Ryder Cup ticket must complete a two-stage process that includes registering a photograph, before applying for tickets. Daily Tickets range in price from a £10 concession ticket for Under 16s on the Practice Days, to £145 for a Sunday ticket, while a range of combined ticket options is also available.
Those fans interested in Practice Day tickets can purchase them immediately on a first come, first served basis. All Match Day applications are included in the ballot, with those who have been successful being notified during the week commencing Monday August 12.
General Admission ticket holders have access to all public areas of the golf course and its facilities, including the tented village, ground access to all 18 holes of The PGA Centenary Course at Gleneagles and access to any grandstand on the course. The full range of ticket options available includes: Practice Day and Single Day tickets, alongside Two Day, Four Day and Six Day Season Tickets.
The official ticket application process is now open on the Ryder Cup website. General Admission tickets for The 2014 Ryder Cup include a photographic image of its owner in order to prevent fraud and ticket transfers. Applicants must therefore register their photograph with Ryder Cup Europe prior to applying for tickets.
For more information and how to register for tickets please visit www.rydercup.com/europe/2014tickets.

Gleneagles and the Ryder Cup - The History