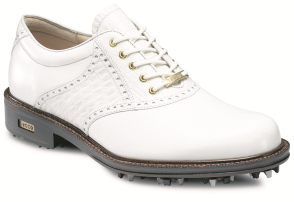 Alstom Open de France this past weekend at Le Golf National in Paris.

Showcasing the ECCO logo on his headwear, G-Mac began Sunday tied for the lead and went on to post a final-round 67 to finish the week nine-under par and earn a four stroke victory. This latest title – his third of the season after the World Match Play Championship and RBC Heritage – moved the 33-year-old to No. 6 on the Official World Golf Ranking and second in The Race to Dubai.
“This is one of the most difficult and well put together courses on the European Tour and I executed my game plan incredibly well this week,” said McDowell. “I hit a lot of greens and hung in there with the putter today and now I’m a proud French Open winner.”
A distinctive leather-soled golf shoe, World Class GTX combines traditional craftsmanship with modern performance technologies. Its rich leather uppers are waterproof via a GORE-TEX® membrane, while an ECCO Second Skin lining and insole promote superior comfort, cushioning and climate control.
“For Graeme to get through the week posting only four bogeys on such a challenging track is pretty remarkable,” says Jesper Thuen, Global Sponsorship, PR & Event Manager – ECCO Golf. “Striking the ball and putting how he is right now, it’s a great way to head into The Open Championship at Muirfield.”
In addition to McDowell, the ECCO men’s golf collection is worn in competition by scores of international Tour stars, including Fred Couples, Thomas Bjørn, Marcel Siem, Thongchai Jaidee, Stuart Appleby, Andreas Hartø, Wu Ashun, JB Hansen and many others.

G-Mac In The Bag