Graeme McDowell’s victory in the Volvo World Match Play Championship this weekend has given Cleveland Golf and Srixon another win on the European Tour. 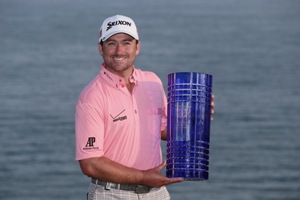 McDowell used a Srixon Z-STAR and new 588 RTX wedges.
McDowell claimed his second victory of the season, having already won the RBC Heritage on the PGA Tour last month, after beating Thailand’s Thongchai Jaidee 2&1 in the final.
The 33-year-old was using the new Cleveland 588MT 3 and 4 Irons, as well as two new 588 RTX wedges* in 52 and 58 degree lofts.
McDowell said of the victory: “It’s very special. We have been talking all week about how prestigious this event is. I can’t say how excited I am to win it and add my name to that list of legends.”
The victory sees McDowell move up to 7th in the Official World Golf Rankings and into first place in the European Tour’s Race to Dubai standings. He also joins a list of winners at the Volvo World Match Play that includes Seve Ballesteros, Arnold Palmer, Jack Nicklaus, Gary Player, Nick Faldo, Greg Norman and Ernie Els.

Graeme McDowell In the Bag:

In The Bag Series