With the success of the Free-Inspired Nike TW’13, Nike Golf has announced an expansion of the choices for men and the creation of a new style for women. Nike say that freedom of movement with maximum ground feel is crucial to the golf athlete and Free-Inspired outsole technology provides that benefit. Available at the end of August, the Nike FI Impact 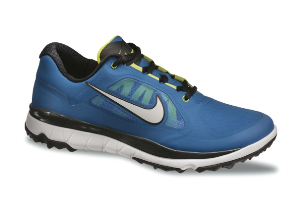 provides the flexibility to unleash the full power of an athlete’s swing.

Just as Tiger Woods’ insights helped pave the way for the first Free-Inspired golf shoe, Suzann Pettersen has now teamed up with Nike designers to develop the first Free-Inspired footwear for women, the Nike FI Impact. Pettersen came to Nike WHQ for footwear testing at the Nike Sport’s Research Lab (NSRL) in August of 2012. She had always been an advocate for traditionally spiked shoes, but realised quickly she could harness as much power without the removable spikes. Nike designers set to work to create a Nike Free-Inspired shoe to meet her athletic needs, incorporating technology from the successful Nike TW’13 footwear.
“We collaborated closely with Pettersen to create a shoe fit for her game,” said Lee Walker, Nike Golf’s footwear product director. “The FI Impact allows her to get the transfer of energy she demands, proving even a swing as powerful as Pettersen’s can utilise the performance of Integrated Traction.”
In her first tournament round in the footwear at the LPGA LOTTE Championship, she carded an impressive 65, charging on with four under-par rounds to win the tournament. “After I tried them once, I was dying to get them on my feet in competition,” expressed Pettersen. “I can really feel the ground and the increase in power through my swing.”
The Nike Free-Inspired outsole of the Nike FI Impact is designed to mimic and conform to the natural motion of the foot while delivering all the protection and traction of a lightweight performance golf shoe. This allows the athlete to keep contact with the ground longer, better harnessing the energy of the foot to the shoe and, therefore, the shoe to the ground. For Pettersen’s explosive swing, this means more control and power with every shot.
The men’s version of the FI Impact also utilises the Nike Dynamic Fit system to help harness the foot to provide the support athletes demand. A Nike Free-Inspired platform and waterproof mesh upper offer increased flexibility with breathability to keep feet cool, dry and comfortable.