What if the R&A and USGA weren’t around to govern the design of golf equipment?

How far could an ‘unrestricted’ driver hit a normal golf ball?
Surprisingly, the answer may be discovered by a new British team formed by Zen Golf to create the world’s most technologically-advanced golf driver, in an attempt to break the long-standing world carry record of 408 yards 10 inches.
Richard Noble OBE, who himself set a new Land Speed Record of 634mph in 1983, and whose team created Thrust SSC which, in 1997, broke the sound barrier when Andy Green set a new record of 760mph, is the inspiration and driving 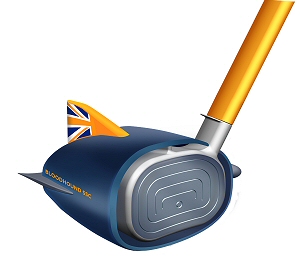 force behind the new car, Bloodhound SSC.
With a record attempt predicted in 2015 on the Hakskeen Pan in South Africa, Noble has this to say about the record-breaking golf driver project: “The technical challenges facing Bloodhound SSC as we attempt to break the 1000mph barrier will undoubtedly lead to a quantum leap forward for British engineering. I’m really excited see how these emerging technologies can be harnessed to break barriers in Golf Sports engineering”.
Nick Middleton, founder of the Zen Golf project, takes up the story: “Now that Golf is an Olympic sport, this Bloodhound Driver project (www.zenoracle.com/bloodhounddriver) will drive forward the momentum from London 2012 and will create an enduring legacy through the great work being produced by British sports engineering and innovation”
Images released today show early designs of a driver which, if the team are successful, will be used in an attempt to break British golfer Karl Woodward’s long-held record of 408 yards’ carry at sea level.
Woodward himself is involved in the project. “My record has stood for more than 10 years now, which is very unusual 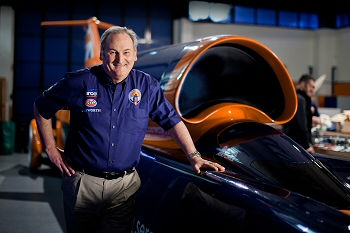 considering all the attention being paid to golfers’ athletic abilities. For me this project is about much more than the Driver, so I’m really excited to be involved in something that will potentially change every aspect of the game” he said.
Although most of the technology behind the new driver is being kept under wraps for now, Middleton admits that the golf club, and the car, will share some of the same DNA. The Sheffield high-tech precision engineering firm Newburgh is already working with the Bloodhound SSC project, which is intended to highlight British innovation in line with the government’s STEM (Science, Technology, Engineering and Mathematics) education and apprenticeship goals.
The Zen Bloodhound Golf team will be keeping golfers updated with a video diary and news blogs. “The club will be a completely new design, with grip, shaft and club head all being created from the archetypal clean sheet of paper” said Middleton. “This is an opportunity for British design and engineering to show that it still leads the world – and in the most spectacular way possible.”

ON BLOODHOUND’S F1 and OLYMPICS EXPERIENCE …
The Bloodhound Driver is being developed by designers and engineers who have years of experience working with top F1 teams, and who have developed equipment for Britain’s Olympics teams.
ON AERODYNAMICS…
The clubface ‘gap’ and side fins aid aerodynamics, plus they maximise head velocity and aid stability.
ON MATERIALS AND MANUFACTURING…
Bloodhound will feature advanced composite materials, and the latest aerospace manufacturing technologies.
ON THE SHAFT AND GRIP…
Expect revolutionary shapes and materials from Bloodhound’s shaft and grip too. The Driver will be a natural extension of the athlete’s body.
DESIGN OCD …
The Bloodhound Driver challenges all current thinking about driver design, with world-class attention to detail
More can be seen on the project’s site at www.zenoracle.com/bloodhounddriver.