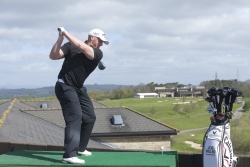 Former World Long Driving Champion Joe Miller blasted balls from the hotel roof at the Celtic Manor Resort as a spectacular appetiser for next week’s Golf Live and The Celebrity Cup.

From his makeshift tee some 110 feet above the ground, Miller was set the task of hitting the ball onto a par-three green on the golf course some 360 yards away. He completed that task with room to spare, managing to smash his longest drive from the top of the towering, 400-bedroom hotel a scorching 402 yards – into the wind!

Miller, who became the first European to win the RE/MAX World Long Driving Championship in 2010, will be part of a star-studded Golf Live and The Celebrity Cup event at Celtic Manor from May 10-12.

As well as marvelling at his long driving prowess, visitors to the event will be able to pick up tips from tour stars Colin Montgomerie and Soren Kjeldsen, watch jaw-dropping trick shots from Paul Barrington, and root for their home nation in The Celebrity Cup which features the likes of Olympic hero Sir Steve Redgrave, comic Rob Brydon, former Westlife singer Brian McFadden and football legend Kenny Dalglish.

Miller said: “My longest drive in competition is 474 yards but I don’t think I’ve ever hit drives from a more unusual location than up here on the roof of Celtic Manor. When I saw the hotel from the motorway, my first reaction was, ‘I’m not going up there, am I?’ It’s a good job I’m not afraid of heights!

“It was a lot of fun hitting balls from up here and I’m delighted I managed to really get hold of a few. I’m sure I’ll be hitting the ball even further at Golf Live and The Celebrity Cup. My show has always been a real crowd-puller at previous events.”

Now in its fourth year, Golf Live is the world’s leading interactive golf show with its unique skills theatres from top players, expert custom-fitting and the latest clubs, balls and accessories from the world’s leading manufacturers, and a comprehensive exhibition of golf apparel, merchandise and golfing destinations.

New this year is the star-studded Celebrity Cup which pits big names from the worlds of sport and showbiz against each other in a clash of the nations between England, Ireland, Scotland and Wales.

For more information or to buy tickets visit www.thecelebritycup.co.uk or phone 01633 410318.