The man who put South Africa on the golfing map landed in São Paulo today (Tuesday 2 April) on a mission to do the same for the sport in Brazil.

As part of its sponsorship of this week’s Brasil Classic tournament (April 4-7), global golf sponsor HSBC has flown in 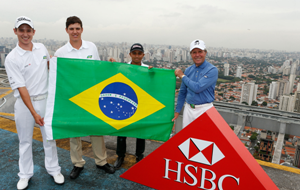 international golf legend Gary Player to help three of the country’s best young players prepare for the event with a 48 hour masterclass in golfing excellence.
As the countdown continues to golf’s return to the Olympic Games at Rio 2016, the nine-time Major winner gave Rio-born Cristian Barcelos, 18, Curitiba-born Daniel Stapff, 22, and Rafael Becker, from São Paulo, a putting lesson on the roof of one of the city’s tallest buildings, Centenario Plaza. For Becker, it’s the perfect birthday present – he turns 22 today.
Player, a finalist for the 2016 Rio Olympic golf course design bid, hopes to lend the young Brazilians advice from his storied career that includes a record setting 59 en route to his 1974 Brazil Open victory.
The three players, who are all taking part in the US $675,000 Brasil Classic presented by HSBC, will spend two days under the wing of the golf icon as part of a comprehensive masterclass covering everything from mental preparation to diet and fitness plus all aspects of the game from tee to green.
Brasil Classic presented by HSBC is a new event on the Web.com Tour, the developmental tour which represents the main opportunity to earn a place on the PGA Tour.
South African Player, who is renowned as the world’s most travelled sportsman having clocked up an incredible 25 million km, said: “When I first started to travel the world in the 1950s it was a genuine breakthrough moment for golf in South Africa – now could be the moment for Brazil and if my visit can inspire the next generation of talent that really would be fantastic.
“When HSBC contacted me I was more than happy to answer the call – Rio 2016 is fast approaching and this Brasil Classic event is a great shop window for golf in this part of the world.
“I’m absolutely thrilled that golf will be included in the Olympics once again. The exposure will be a great catalyst for growth and development around the world, especially in new, emerging markets and the growth in Brazil and Latin America will be tremendous.
“The global game of golf is developing at a rapid pace and there’s one thing I’ve learnt in my career – change is the price of survival.”
Giles Morgan, HSBC Global Head of Sponsorship & Events, added: “This year marks HSBC’s tenth anniversary as a major international sponsor of golf – in that time we have been involved in 30 tournaments and 1,000 golf days and helped thousands of children worldwide get involved in the game of golf.
“As a global banking and financial services organisation, we pride ourselves on opening up a world of opportunities for people and we want to help Brazil maximize the Olympic opportunity – this is why we have sponsored this groundbreaking new event on the Web.com Tour and why we have flown one of the best golfer’s in history to São Paulo this week.
“We hope these three young players can go on to great things for Brazil and it would be incredible to see them making an impact at Rio 2016 – with a nine time major winner on their side they’ve got a great chance.”
Image Caption : Nine time Major winner Gary Player gave three young Brazilian golfers a putting lesson on the helipad on the roof of Centenario Plaza, one of the tallest buildings in Sao Paulo (L-R: Daniel Stapff, Rafael Becker, Cristian Barcelos and Gary Player).

Golf in the Olympics - For or Against?

Should Golf be an Olympic Sport?