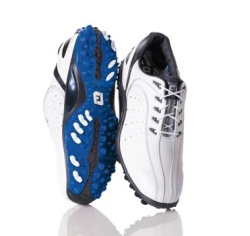 FootJoy salutes brand loyalist Chris Wood, who secured his maiden European Tour victory on Saturday at The Commercial Bank Qatar Masters, Doha GC.  The 25 year-old from Bristol stood on the 18th tee in the final round knowing he needed an eagle to secure victory, and  he duly delivered, with a stunning 6-iron second shot into 15 foeet to set up the winning putt. Wood’s final round of 69 gave him an 18 under-par total of 270 and vaulted him straight into the top 64 of the Official World Golf Rankings. The Englishman was presented with a winner’s cheque for €314,598 which in turn elevated him into sixth place in the 2013 Race to Dubai standings.

It was an historic week for FootJoy as Wood became the first ever tour player to win wearing the brand new FJ Sport Spikeless™.  An extension of the popular FJ Sport™ franchise, the FJ Sport Spikeless is designed to offer outstanding levels of ‘Sports’ performance. This lightweight, flexible and athletically-styled hybrid shoe also benefits from a durable and spikeless outsole that can be worn to great effect both on and off the course. Having first taken delivery of his new golf shoes at the Abu Dhabi HSBC Golf Championship, Wood was instantly impressed with his new footwear, commenting. “I loved the look of the shoes as soon as I saw them, and the fit and comfort was unbelievable, straight out of the box, they are like a slipper.”

Hot on the heels of Wood in Doha was fellow FJ brand ambassador, George Coetzee who continued his sterling start to the 2013 European Tour season , with yet another impressive performance. Trusting the reliability and consistent performance of FJ Sport™ ,the unrivalled performance and fit of the FJ StaSof™ glove as well as the stylish FJ Apparel, the South African produced a superb final round of 64 containing an eagle and six birdies, to finish one shot behind the Englishman. This was Coetzee’s 21st Top 10 finish on  the European Tour and a victory looks certain to be on the horizon. As well as Wood and Coetzee, 56% of the field in Qatar put their trust in FootJoy shoes, compared to only 23% for its nearest competitor.

“We launched  the innovative FJ Sport Spikeless shoe in October 2012 and we are thrilled that Chris has recorded the first tour win for this model in such epic fashion”, commented Russell Lawes, European Marketing Manager, FootJoy. “Chris was extremely pleased with the performance of the shoe, only a week after getting them out the box and I am sure more of our ambassadors will follow in his footsteps by putting this new spikeless offering in play”.

Whether it is the all-round excellence of FJ ICON™, the Xtreme Platform Stability of the XPS-1™, the reliability and consistent performance of DryJoys Tour™, the sports performance of the FJ Sport™, the multi-functional, lifestyle-infused Contour Casual, or the minimal construction and maximum feel of the brand new FJ M:PROJECT™, FootJoy remains the overwhelming favourite for golfers of all abilities around the world.