Building on a successful year with the original VR_S range of clubs, Nike Golf  have launched a  High Speed Cavity Back iron designed to maximise distance, control, and forgiveness. The launch follows the unveiling of the new Nike Covert Driver earlier this month.

The Nike VR_S Covert irons combine a sleek look with high performance technologies. Proprietary technology platforms include a High Speed Cavity Back and a NexCOR face. 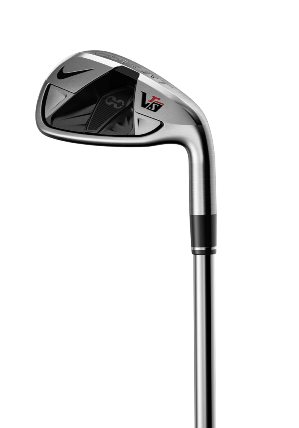 every shot. By incorporating this new hidden technology into its fastest lineup yet, Nike Golf says its engineers have been able to move the weight of the club to the corners, raising Moment of Inertia (MOI) to increase forgiveness and add even more distance to off-centre shots.

The cavity back technology is hidden “covertly” giving the iron a sleeker look at address with the performance advantages of a highly forgiving distance iron. The VR_S Covert irons are Nike’s most versatile irons to date and will appeal to a very wide range of players.

A new variable added to the VR_S Covert irons to maximum distance is the incredibly thin 1.6mm sole thickness designed to heat up the face.

“Distance, control, and consistency are the keys to successful golf shots,” said Nike Golf Director of Club Creation, Tom Stites. “We combined a High Speed Cavity Back, NexCOR technology, and a dual bevel sole to maximise distance for every club in the bag. Golfers will notice positive improvements not only on crisp shots, but on off-centre shots as well.”

Nike say the NexCOR face is designed to deliver faster ball speed and longer shots from a wider area of the face. NexCOR creates more speed at impact by employing variable face thickness that focuses on increasing the sweet spot not only in the center of the face, but also to the lower portion and towards the toe where most golfers are likely to make impact.

For the VR_S Covert irons, engineers have created a dual bevel sole, which allows the club to sit low to the golf ball and prevent digging. The sole makes a clean cut through the grass making interaction with the turf less disturbing to the golf shot.

The Nike VR_S Covert irons are part of the VR_S Covert family that includes the iconic Nike Cavity Back drivers, fairway woods, and hybrids -all available in golf stores throughout Europe on February 8, 2013.