John Letters’ latest staff player Paul Wesselingh has been crowned the European Senior Tour Rookie of the Year, with one event still remaining.

The 51 year old Englishman secured a maiden victory and six other top ten finishes in 14 appearances in 2012, and is 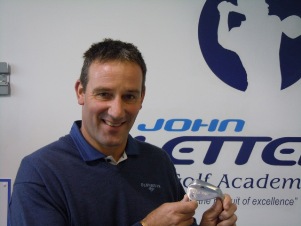 currently fifth in the Order of Merit heading into the season’s final event, the MCB Tour Championship in Mauritius.

“This is the highlight of my career,” said Wesselingh, who enjoyed a successful career as a club professional at Kedleston Park before joining the Senior Tour. “I’m absolutely over the moon. I’m living the dream playing on the Senior Tour.”

Wesselingh teamed up with Letters early on in the 2012 season and has never looked back. Playing the full complement of Letters equipment including Master Model Driver, fairway, Satin irons, MM grind wedges and a Golden Goose putter – Paul made the switch to Letters after testing the products on tour and being fully custom-fitted at the John Letters performance Centre in Huddersfield.

He was joint runner-up on his debut, in the Mallorca Senior Open, and won the ISPS Handa PGA Seniors Championship at DeVere Slaley Hall a month later, finishing one shot ahead of Anders Forsbrand and Andrew Oldcorn. Paul is now one performance away from being eligible for all three Senior Majors in 2013.

Wesselingh commented on his season: “The target at the start of the season was to finish in the top 30 and keep my card, but it looks like I’ll be in the top ten or even top five – depending on results in Mauritius – which is brilliant.”

Paul is just one of a number of tour players that have turned to John Letters in 2012 – following  another successful summer for the famous Scottish brand on tour.