FootJoy, celebrated the success of  Rory McIlroy as he capped off his remarkable 2012 season with victory at the DP World Tour Championship on a dramatic final day at Jumeirah Golf Estates. The World #1 held off World #2 and fellow Ryder Cup player Luke Donald, who threatened to spoil the Northern Irishman’s lap of honour after a year in which he has won The Race to Dubai, the US PGA Championship and the money list in America. Tied for the lead with second-ranked Donald overnight, the 23 year old,wasn’t to be denied and finished with five closing birdies. By adding this title to 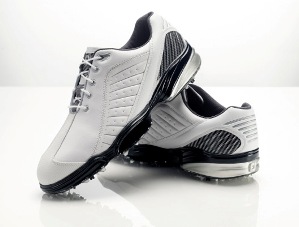 Footjoy  is able to reflect on yet another highly successful year on the European Tour, with 61% of players at any European Tour event choosing the comfort and stability of FootJoy shoes, compared to just 16% for its nearest competitor. FootJoy was also accountable for 56% of all top ten finishes, almost four times that of its nearest competitor, as well as amassing a total of 30 tournament victories, 26 more than any other brand. FJ success in shoe counts and win rates continued over on the PGA Tour with 61% of players trusting FootJoy shoes, amassing 59% of tournament wins compared to the nearest competitor at an 11% win rate. The impressive 2012 figures highlight the brand’s continued popularity amongst the game’s best players.

The FootJoy glove counts were also very impressive throughout the 2012 season, with  41% of players at any European Tour event choosing the comfort and unrivalled grip of FootJoy gloves, compared to just 18% for its nearest rival. FootJoy was also accountable for 40% of all top ten finishes, which is almost three times that of its nearest competitor, as well as totalling 20 tournament victories, 12 more than the nearest competitor.

In one of the most memorable seasons in European Tour history, FootJoy ambassadors secured some of the year’s most revered titles; Rory McIlroy led the way wearing the FJ Sport™, with a string of incredibly consistent performances, as the Irishman’s stellar year ended with him holding the World’s #1 ranking and topping the European Tour and PGA Tour money lists, repeating the success of fellow brand ambassador and World #2 Luke Donald who trusted the flagship FJ ICON to claim the PGA BMW Championship.

“This year has been one of FootJoy’s most successful European Tour seasons ever, with FJ ambassadors experiencing domination in all four Majors and a World #1 and #2 ranking once again”, commented Russell Lawes, European Marketing Manager, FootJoy. “Whether it is established FootJoy loyalists like McIlroy and Donald or the new crop of talented youngsters such as Matteo Manassero, we have a FootJoy shoe to suit all individual tastes and performance needs,”

Whether it is the all-round excellence of FJ ICON™, the Xtreme Platform Stability of the XPS-1™, the reliability and consistent performance of DryJoys Tour™, the sports performance of the FJ Sport™ or the multi-functional, lifestyle-infused Contour Casual, FootJoy remains the overwhelming favourite for golfers of all abilities around the world.

For more information on all FootJoy please visit www.FootJoy.co.uk