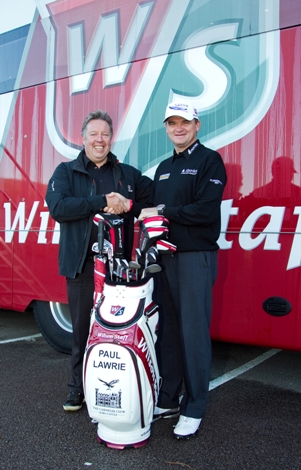 The former Open champion, who made his Ryder Cup debut at Brookline in the same year he triumphed at Carnoustie, will continue to use Wilson Staff irons and carry the distinctive Wilson bag and branded cap while promoting the brand in tournament play on a global basis.

“Wilson Staff clubs have been central to me playing the best golf of my career and so I’m delighted to be able to commit to the brand once again,” said Lawrie. “Wilson Golf has won more Majors than any other brand and I would love to add another Major title to the list using my FG Tour irons – by far the best set of irons in terms of feel and performance that I’ve ever played.”

The latest agreement comes 19 years after the popular Scot first signed with the leading Major-winning brand and nearly three years after he re-signed to use Wilson Staff FG Tour irons and wedges.

Commenting on the new agreement, Doug Wright, Business Director of Wilson Golf in Europe, said: “Paul’s record with his Wilson Staff irons in recent seasons speaks volumes for the clubs and his consistency with them. To have him commit his immediate future to Wilson Staff is a big boost for the brand and demonstrates his faith in our ability to provide the best-performing clubs.”

Since playing with Wilson Staff FG Tour irons in 2010, a rejuvenated Lawrie has:

As a Wilson Staff Technical Adviser along with three-time Major winner Padraig Harrington, Lawrie is also helping Wilson Golf with product development at its new Innovation Centre in Chicago, a short drive from this year’s Ryder Cup venue at Medinah.