Just days after his place in next month’s European Ryder Cup team was confirmed, Wilson Staff player Paul Lawrie captured his second European Tour title of the year with a runaway 4-shot victory in the Johnnie Walker Championship at Gleneagles on Sunday (26 August).

As a result of his eighth Tour win, Lawrie became the first Scot to win three official titles on Scottish soil – adding the prized Johnnie Walker trophy to his one Major title at the 1999 Open Championship and the Alfred Dunhill Links Championship title at St Andrews, Kingsbarns and Carnoustie in 2001. 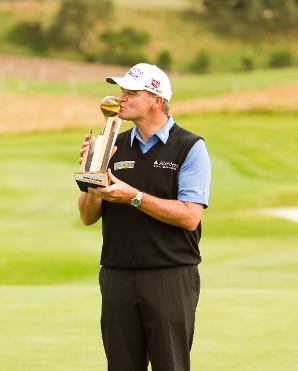 the PGA Centenary Course at Gleneagles, venue for the 2014 Ryder Cup matches.

Using his Wilson Staff FG Tour irons (3-PW) that he played to win the Qatar Masters and deliver seven top ten places this season, Lawrie took his official career Tour earnings to more than £9m (€11m) and finish third on Europe’s Ryder Cup Points Table. The result also saw him climb to seventh in the European Tour’s Race to Dubai and to No. 30 in the Official World Golf Rankings.

“I’m definitely playing the best golf of my career,” said the 43-year-old from Aberdeen who returned to playing Wilson Staff irons in January 2010 and last year captured his first Tour victory in seven years. “And I have to say that the confidence I get from playing Wilson Staff clubs has been a major factor in the resurgence in my game, because I’ve been able to improve my Greens in Regulation stats considerably over the past couple of years,” he added.

Lawrie, won seven of his eight European Tour titles while leading or sharing the lead going into the final round. He made an impressive Ryder Cup debut at Brookline 13 years ago.

“It’s been great to see Paul return to winning ways with Wilson Staff irons and we wish him well in the forthcoming Ryder Cup match at Medinah, located close to our Chicago global headquarters,” said Doug Wright, Business Director for Wilson Golf in Europe.

Details of Wilson Staff FG Tour irons can be viewed at www.wilson-staff.com.