With the countdown to golf’s most unprecedented event well and truly underway, London Golf Club is showing its support for Jose Maria Olazábal’s European Ryder Cup team by offering the chance to win a complimentary fourball around the International Course.  Golfers booking a tee time between now and the beginning of Sunday’s singles session (30th 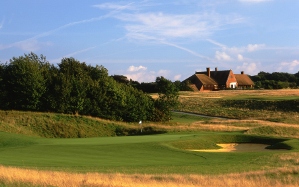 September) will automatically enter into a prize draw to win another fourball around the fantastically conditioned course.

Designed by acclaimed architect, Ron Kirby, The International course presents a distinctly inland links feel with fast, undulating fairways that allow you to chase the ball into position.  The Par 72, 7,005 yard layout is a tournament venue in its own right having previously played host to European Tour Qualifying School Stage 1 and Open Championship Regional Qualifying. In pristine condition throughout the year, the course is held in high-esteem for the quality of its greens as well as a number of exciting risk, reward tee-shots over water which ensure a memorable round.

London Golf Club’s flagship course, The Heritage is a Jack Nicklaus Signature design that bears all the hallmarks of the 18 time Major Champion. Measuring up to 7,257 yards of the very back tees, the course provides an exhilarating test for golfers of all abilities, including the best players in the game who pitted their skills against the challenging layout during The European Open in 2008 & 2009.

With a reputation for innovation and striving for excellence there are exciting times on the horizon for London Golf Club as it recently announced that, together with The European Tour it has submitted plans to local authorities for the construction of a new European Tour Performance Institute compete with driving range and an innovative 9-hole academy golf course. Alongside the 130-bedroom luxury hotel 5-star hotel and spa, for which planning permission has already been granted and the existing 36-holes of championship golf these significant developments encapsulate the club’s vision of becoming a truly world-class destination primed for hosting major golfing events.