Druh Belts & Buckles has been announced as a licencee for the upcoming Ryder Cup matches between the USA and Europe which tees off at the Medinah Country Club from September 28th to 30th.

Through an agreement with Ryder Cup Europe, Druh has the right to produce a range of handmade belts featuring The 2012 Ryder Cup logo for the 39th staging of golf’s most competitive team encounter. The Ryder Cup Belts will be available through www.rydercup.com/shop.

With the prestigious event under a month away Europe’s Ryder Cup Captain, José Maria Olazábal, recently named Denmark’s Thomas Björn and Irishmen Darren Clarke and Paul McGinley as Vice Captains. By coincidence, both Björn and 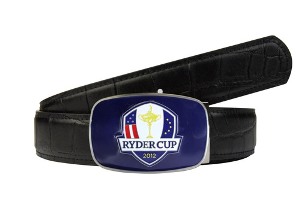 McGinley are fans of Druh Belts and are ambassadors for the brand.

Following The Ryder Cup, Druh will also produce a range of belts for The European Tour featuring the recognizable Harry Vardon insignia for inclusion in The European Tour’s merchandise range.

Wins include victories from two Druh brand ambassadors in June: one by England’s Lee Westwood in the Nordea Masters in Sweden whilst Thongchai Jaidee of Thailand secured the silverware at the ISPS Handa Wales Open. In the same month England’s Gary Wolstenholme won theBenahavis Senior Masters, his second title on the European Senior Tour just two weeks after his victory at the Mallorca Open Senior.

Meanwhile Druh fan, Roger Chapman enjoyed two major victories in as many months after he added the US Senior Open Championship in July to his US Senior PGA Championship title in May. The 53-year-old wrote himself into the golfing history books as the first Englishman to win both titles.

Earlier in the year, Druh signed up major champion Sun Young Yoo of South Korea to add to its stable of brand ambassadors. Yoo triumphed at the Kraft Nabisco Championship in California back in April with an 18-foot birdie putt at the first play-off hole in the LPGA Tour's first major of the season. Yoo overcame compatriot I K Kim to win her first major title and only her second tournament on the LPGA Tour.

Druh’s latest success came when talented Chris Wood of England secured the Thailand Open in the middle of August wearing one of his favourite ‘db’ belts.

For more on Druh Belts & Buckles, go to www.druhbeltsandbuckles.com  .