With openings still remaining for amateur teams to participate in the inaugural Seve Ballesteros Legends Tournament, scheduled Nov. 29-Dec. 1 at Pebble Beach, event organizers today released a partial list of the celebrities who will serve as captains to the 18 four-player teams.

With golfing legends and more celebrities set to formally commit to the event in the ensuing weeks, here is a look at those have firmed up their participation: 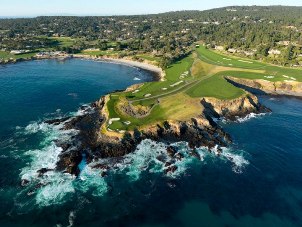 With amateur team openings still remaining, the tournament will celebrate Ballesteros and his non-profit foundation with a par-3 tournament on Pebble Beach’s Peter Hay Golf Course.  The event will bring together teams of amateur golfers playing for the Legends Trophy in a Ryder Cup-like format.  Nine teams from the United States will take on nine European teams in an 18-hole tournament on Thursday, Nov. 29, with each team captained by a well-known celebrity or golfing legend.  Play will take place amid a festive environment with live music and DJs, fine food and wine, TV screens broadcasting from around the course and more attractions.

Amateur golfers are invited to participate, with each team member to receive:

Registration per team of four is $35,000 (£24,000), with fundraising from the Legends Tournament going to the Seve Ballesteros Foundation, which Seve himself set up in partnership with Cancer Research UK in 2009 to raise money for research into brain tumors.  Seve was diagnosed with a brain tumor in October 2008 and it took his life less than three years later.  Cancer Research UK is the world’s leading cancer charity dedicated to saving lives through research.

To participate in the Seve Ballesteros Legends Tournament, e-mail [email protected], or call:

More information about the Seve Ballesteros Legends Tournament is available by visiting www.sevelegends.com.