We recently featured the Golf GPS devices on the market, we now take a look at the other distance measuring devices the golf laser range finders.

Following the initial success of GPS units within the European golf market, a new way of checking distance emerged in the form of the Laser Rangefinder.  The main advantage a Rangefinder has over a GPS unit is the ability to find an exact yardage to the pin that is being played to as opposed to the yardage to a front, back or middle of the green.

Two main manufacturers have emerged to dominate the Rangefinder market. The first is Bushnell, who are an American company that have been developing rangefinders for the hunting industry for many years. The second is photography specialist Nikon.  Nikon’s specialist skills in digital imagery and lens production have allowed them to become a major force in the Rangefinder market. 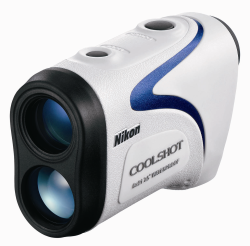 The Nikon Coolshot is new for 2012 and is Nikon’s successor to the hugely popular 350G Laser Rangefinder. The Coolshot is ergonomicaly designed and is instantly recognisable in a modern white and blue finish. Improvements have been made to the weight and grip creating a comfortable and easy to use unit.

The Coolshot features a newly developed LED illumination of the display for increased ease of use as well as 8-sceond scanning for instant priority targeting.  A lens magnification of x6 with an increased field of view also improves the usability of the Coolshot.

The unit is waterproof for use in even the most testing conditions and is legal for use in any USGA and R&A competitions.

The Nikon 1000 AS Laser is the flagship model in the Nikon range and has been selected as the official rangefinder of the London Olympic Games.  Although not legal for tournament play, the Nikon 1000 AS is aimed at golfers looking for the most accurate distances when preparing for a tournament. Unlike the Nikon Coolshot, the 1000 AS makes a slope adjustment in measurement and will measure a distance of up to 1000 yards.

Other features of the Nikon 1000 AS include a LED display for ease of use when playing at dusk as well as waterproof resistance of 1m for up to 10 minutes. The display features a  7.5 degrees wider field of view and 6x magnification.

2012 sees the long anticipated launch of an all-in-one Laser/GPS unit. It is not surprising that Bushnell have been the first company to produce a Hybrid in the form of their Bushnell Hybrid Laser GPS. Since the introduction of GPS and Laser Rangefinders there have been issues with both. The GPS only measure static points on the course and cannot measure changes in pin position whereas the Laser Rangefinders are next to useless when faced with a blind shot or an obstacle such as bushes or trees in-between the point of measurement and the pin.

Bushnell’s new Hybrid Laser GPS is completely legal for tournament play.  The Laser Rangefinder comes with a 5x magnification as well as pinseeker and scan technologies. Distance measurements are accurate +/- 1 yard. The GPS feature is built onto the side of the unit and has 20’000+ worldwide courses preloaded. Courses are auto-recognised by the unit and there are no monthly download or subscription fees.

Bushnell have been the number 1 used rangefinder on the PGA Tour for the last 10 years and have led the way in development of golf rangefinders for use by the golfing community.  The Bushnell Pro 1M is a premium rangefinder that gives every golfer all functions needed for accurate distance acquisition on the course.

The Bushnell Pro 1M features a 7x magnification and will read distance in both yards and metres. Pinseeker technology is also built in to zero in on pins making the Pro 1M extremely quick and easy to use.  Distances can be measured anywhere between 5 – 1000 yards when used for measurement of trees and 5-500 yards when measuring pins.  It also features a rain-mode and waterproof shell for use in adverse conditions.

The Bushnell Pro 1600 is Bushnell’s mid-range laser rangefinder and is legal for use in R&A and USGA competition. Standard features include 7x magnification, +/- 1yrd accuracy when measuring distances and pinseeker technology for ease of use when measuring a distance to the pin.

The Pro 1600 is also completely waterproof and features a rain mode and waterproof shell. An additional scan mode allows a player to read multiple distances while panning around a target and the surrounding area.

The Bushnell Tour V2 is rapidly becoming a favourite amongst all levels of golfer, while small and compact it is packed with the latest Laser Rangefinder technology. Unlike other Rangefinders it comes with a choice of 4 colours, Silver, Blue, Pink and White.

A 5x magnification and in-view LCD display makes reading distances fast and easy as does the pinseeker and scan mode technology. Should you be unlucky enough to be caught in wet weather there is also a rain mode. A tripod mount is included for range use as is a 3-volt lithium battery. The focus on each eye piece can be adjusted by rotation for creation of a perfect view.