A SIGNIFICANT piece of history will be created this week at the first mixed gender Australian Open at Victoria Golf Club and Kingston Heath Golf Club in Melbourne.

With men, women and disabled players all competing on the same stages at the same time, the Australian Open will return for the first time since 2019 because of the Covid pandemic.

And all eyes will be on home hopes Minjee Lee and Min Woo Lee. The brother and sister will tee it up alongside Cameron Smith, Adam Scott, Hannah Green, Steph Kyriacou, Karrie Webb, Lucas Herbert, Cam Davis, Geoff Ogilvy, Ryan Fox and Women’s Open winner Ashleigh Buhai in the field as well as many DP World Tour players as part of the co-sanctioning agreement in place for the men’s tournament. The men’s and women’s tournaments will run concurrently with equal prize money of $1.7 million each.

Min Woo Lee has two DP World Tour titles to his name having won the Vic Open and the Scottish Open and he is widely regarded as a terrific prospect. He finished 14th at The Masters and 21st at The Open.

“I’m really pleased that I can have a crack at the Open which is high on my list of priorities and of course, to try and earn bragging rights over my sister who’s making it quite hard for me to keep up,” said Min Woo Lee. “She’s had phenomenal success, I’m very proud of her and I’ll be so happy to get out on course with her in December.” 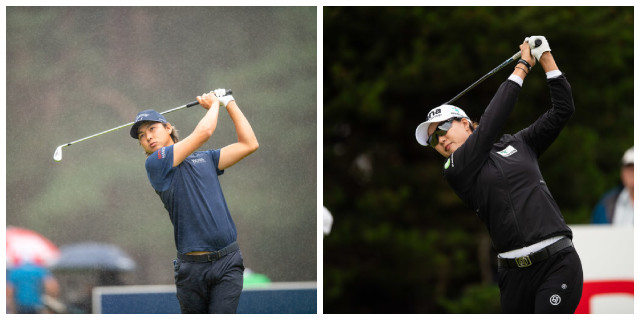 Minjee Lee is one of the best women golfers on the planet. She won the US Women’s Open at Pine Needles Golf Club in North Carolina in June but has yet to claim the Women’s Australian Open despite being in contention on numerous occasions. In eight attempts, her best finish is a tie for third in 2017. As a 17-year-old amateur in 2014 at Victoria she was tied in the lead through 54 holes, but faded late to finish tied-11th leaving the way clear for Karrie Webb to win her fifth Australian Open.

However she has won eight times on the LPGA Tour including two majors - one of just four Australian women to secure a major championship.

Minjee Lee said: “I’m always happy to play the Australian Open and it’s a championship that I’d be honoured to win. Everyone would love to win their national Open, and to have the chance to play alongside Min Woo just adds to the excitement for that week in Melbourne.”

Victoria was designed by Alister MacKenzie and remodelled by Mike Clayton. It is a spectacular course with fast running fairways and lightning-quick greens. It is a par 72 measuring 6,900 yards.

Do not be surprised to see Min Woo Lee and his sister, Minjee, keeping it in the family. Minjee is one of the best women golfers on the planet and her brother looks like he could follow in her footsteps and showed some sparkling form at the Australian PGA Championship.

Min Woo Lee. Could turn out to be a superstar

Adam Scott. Would love to win in home soil

Ryan Fox. What a year he’s had

Ashleigh Buhai. Has had a memorable 2022

Minjee Lee. Has won all over the world

Ashleigh Buhai. Would love to add another title

Karrie Webb. Blast from the past