10 of The Greatest Bunker Hole Outs

From Jordan Spieth’s last-gasp bunker shot to win the John Deere Classic in 2013 to Rory McIlroy’s incredible dunker at this year’s Open, pro golfers have hit plenty of fantastic bunker shots over the years. They’ve holed out from all manner of unlikely positions, but which make our top 10 list? 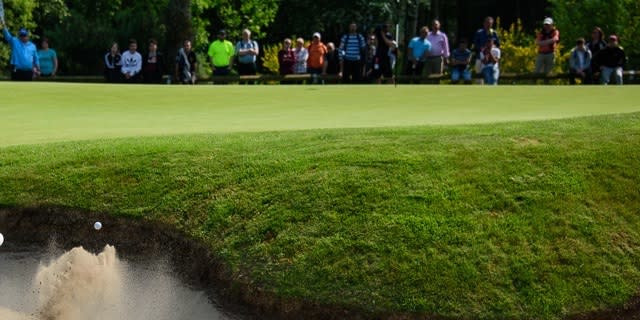 For sheer difficulty and gravitas, this shot by Bob Tway is difficult to top. Dueling Greg Norman, Tway made a mess of the eighteenth from tee to green, missing the fairway off the tee with an iron and then dumping his second into a deep greenside bunker on the wrong side, leaving himself pitching into a downslope with scarcely ten feet of green to work with. He duly holed it to poach victory from right out under the Shark’s nose. What makes this shot so impressive is not just the difficulty, but the sense of occasion and pressure (staring down what was then the world’s number one player on the last hole of a major tournament). And remember that sand wedges in 1986 were a far cry from your modern clubs, with lower lofts and less forgiveness, making Tway’s shot even more incredible.

Truth is, we could have chosen any number of Phil Mickelson bunker shots to put on this list. He’s a magician from the sand. His most magical bunker shot was surely this highlight from the 2006 Memorial Tournament. He was plugged, right up against the lip. He was short-sided. Even his own mother surely felt that par was out of the equation. Well, she was right on one count: Mickelson didn’t make par. He pitched it straight into the hole for a birdie.

The Memorial has been host to some incredible bunker shots over the years, such as this one by Paul Azinger. To set the scene: Azinger had begun the final round of the tournament 3 shots back of fan favourite Payne Stewart, who struck a vein of form. Over the back nine he ate into this lead and when they came to the eighteenth they were all-square. Both found the greenside bunker with their approaches, from which Azinger coaxed his ball into the hole for the win. It was a deft shot under the circumstances, but spare a thought for Stewart: from a horrible plugged lie, he hit a wonder shot to six feet or so, and must have fancied his chances until Azinger’s ball dropped.

Greg Norman was once again the victim of eighteenth-hole bunker heroics in 1990. This time it was David Frost who broke the now-LIV CEO’s heart by flopping into the hole from around 30 yards - one of the toughest-length bunker shots even for professionals. “How many times can Greg Norman take it?” asked the commentators as Frost literally jumped for joy and Norman looked on stoically from the side lines. Still, this was an incredible shot, and Norman couldn’t take it too personally. Furthermore, he used the disappointment as rocket fuel, claiming the Australian Masters, Doral-Ryder Open and Memorial Tournament in the rest of the year.

From 40-50 yards away, having to navigate a large swale and a pin position teetering on the top of a steep tier, Rory McIroy could have been forgiven for feeling a little deflated as he stood over his bunker shot on the 10th hole of the third round at this year’s Open. Few players would have fancied the shot. But riding the waves of the crowd, McIlroy was on another plane that day. He set up to the ball, pushed out a spray of sand, and lobbed his shot straight up the tier and into the hole. It landed as softly as a butterfly and trundled into the hole for an unlikely eagle two, which at that stage gave McIlroy full control of the championship.

Spieth was just 19 and chasing his first ever tour win when he conjured up a slice of magic on the 18th hole of the final round at the John Deere Classic. We all know what happened. Water long and a slippery downslope to contend with proved no bother for Spieth, who promptly sent his shot clattering into the stick and into the hole. Making this birdie for the ages earned Spieth a place in a play-off with Zach Johnson and David Hearn, who he defeated over five-holes to gain his first ever PGA Tour title.

An amateur competing in his first Open (and at Carnoustie of all places), Graeme Storm holed an all-world bunker shot on the fourteenth to keep his dream of making the cut alive. Unfortunately, it wasn’t to be for the 1999 Amateur Champion, but dunking from such a difficult position - he was nearly fifty yards from the hole and deep in a cavernous pot bunker - must have brightened his day and the experience.

Kevin Kisner was also the beneficiary of some luck - and exponent of skill - at Carnoustie and in an Open, this time the 2018 tournament. The 6th hole wasn’t going so well for Kiz as he’d already taken three on the par-5 to dig his ball under the lip of a greenside bunker. From that position, there was nothing to do but stab and hope to get lucky. He did. Not only did the ball pop out - quite the golfing feat in itself - but it skipped across the green and into the hole. The birdie took Kisner back to 7 under par in the final round which, at the time, was just one shot back of the lead. Unfortunately, this was one of few Sunday highlights for the American, as he ultimately failed to challenge winner Francesco Molinari.

Although this bunker shot wasn’t carried out under that much pressure, like, say, on the eighteenth hole of an important match, it’s one of the prettiest hole-outs you’ll see and for that reason earns a spot on our list. Paul Casey was the man responsible for the magic. His swing has always been silky smooth and he lived up to form here, gliding the club elegantly through the sand to pop the ball up and into the hole.

Reminiscent of Phil Mickelson’s famous Memorial shot, Sergio Garcia’s hole out from this bunker at the Abu Dhabi HSBC Championship is another short game play right out of the top cut. He too was plugged up against the lip, and, if anything, had even less green to work with than Phil. Garcia hasn’t always had the most, shall we say, ‘healthy’ relationship with bunkers in his career, but even he must have felt some affection for the sand after pulling off that shot.