RORY McILROY returns to Europe for the third time in four weeks when he plays in the Alfred Dunhill Links Championship. He finished second at the BMW PGA Championship and fourth at the Italian Open to extend his lead at the top of the DP World Tour rankings, and he can more or less sew things up with a victory at St Andrews this week.

But just as important for the world number two, he will be partnering his father Gerry in the Team Championship, an event which they came so close to winning in 2019.

“I’m really looking forward to playing,” said McIlroy. “It’s one of the most long-standing events on the DP World Tour and one I really enjoy, especially when I partner with my Dad.”

“I’ll be taking the Team Championship just as seriously as the professional event and it would be a special experience if we could win together.”

Team McIlroy came within a whisker of winning in 2019 when they finished on 39-under-par, however were beaten on countback by Tommy Fleetwood and Ogden Phipps.

The four-time major champion has had a close relationship with the Alfred Dunhill Links over the years. In 2007, at 18, he became the youngest player to earn a DP World Tour card from tournament play when he finished third.

McIlroy added: “The support I’ve had from the Scottish and visiting fans has always been fantastic and I have had some wonderful memories on these courses. St Andrews is a very special place for me. When I got my Tour card there back in 2007, it was a week that changed my life.” 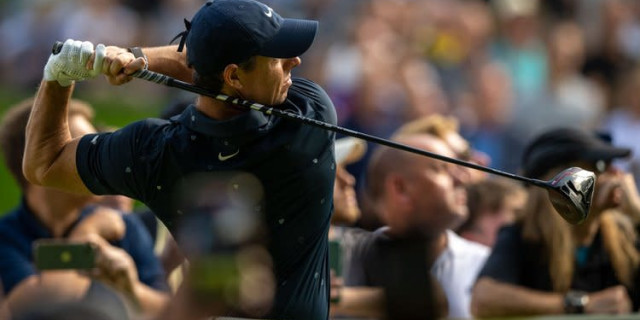 McIlroy will head a world-class field in the event, a celebration of links golf, played over the Old Course St Andrews, Carnoustie and Kingsbarns.

Only Tyrrell Hatton (2016 and 2017) and Padraig Harrington (2002 and 2006) have had their names inscribed on the trophy on two occasions. Now 2016 Masters champion Danny Willett will be hoping to match them.

Willett said: “I’ve been very lucky to win on some of the biggest stages in golf, but to win at the Old Course last year on my 34th birthday was really very special. Nothing would please me more than to repeat that next month.

“I had a pretty eventful year with covid, wisdom teeth trouble and appendicitis, so to win at St Andrews in such a big tournament was massive.

“Some people forget, I’ve actually won the Dunhill Links twice. With my caddie Jonathan Smart, we won the Team Championship in 2016. So there is a very special relationship between me and this event.”

Willett is one of only five golfers, along with Harrington, Michael Hoey, Nick Dougherty and Robert Karlsson, to have won both the Individual Professional and the Team Championship.

For Molinari it will be a happy return to Carnoustie after his memorable win there in the Open Championship, when he finished two shots ahead of McIlroy, Justin Rose, Xander Schauffele and Kevin Kisner.

Horschel is Florida born and bred, but loves football. He is a passionate long distance supporter of West Ham United and an ardent admirer of Noble, who played more than 550 times for the London club over 18 years.

He said: “I’m counting down my return to the Alfred Dunhill Links. I love playing in Scotland, it doesn’t get much better than being able to compete on historic links courses like St Andrews, Carnoustie and of course beautiful Kingsbarns.

“I’ve been a supporter of West Ham for quite some time and over the last couple of years I’ve been lucky enough to befriend Mark Noble and call him one of my best friends. A former captain of the club and a club legend, there’s a reason he earned the title Mr West Ham as he embodies the West Ham spirit! I’m delighted to have Mark as my partner this year and look forward to Mr West Ham leading us to victory.”

For the first three days entry is free. Tickets are only required for the final day, Sunday, October 2, on the Old Course.

Rory McIlroy has had a wonderful season, winning three times on the PGA Tour. His victory at the Tour Championship meant that he became the first golfer to win the FedEx Cup for the third time. And he continued his excellent form in finishing second at the BMW Championship and fourth at the Italian Open. The four-time major champion is the favourite (9/2) on Betway. Keep an eye on Tyrrell Hatton too - he is a two-time winner of this event and simply adores St Andrews. And then there is US Open Champion Matthew Fitzpatrick. Apart from winning his maiden major, he finished in a tie for sixth at the Scottish Open and was second at the Italian Open, losing in a playoff.

The Dunhill is played over three courses - The Old Course at St Andrews, Kingsbarns and Carnoustie. They are all classic links courses and the key will be the weather. If it remains calm and dry for four days you will see some low scoring. But if the wind blows we could witness some very high-profile golfers blowing their tops

Rory McIlroy. Seems certain to finish the year on top of the pile (9/2)

Matthew Fitzpatrick. Does anybody have a better short game? (10/1)

Matthew Fitzpatrick. Having the year of his life (10/1)

Eddie Pepperell. Coming back to something like his best (50/1)

Lucas Bjerregaard. Desperately looking for a way back to form (250/1)

Victor Dubuisson. Outrageous talent has spent too long in the wilderness (300/1)

This Dunhill Links Preview article was written in collaboration with Betway