KERCHING! Rory McIlroy overturned a six-shot deficit to pocket a cheque for $18m as he became the first golfer to win the FedEx Cup three times after an astonishing final round at the Tour Championship at East Lake.

The Northern Irishman overhauled world number one Scottie Scheffler to finish one clear of the American and Sungjae Im.

"What a week, what a day," McIlroy told Sky Sports.

"I feel like Scottie deserves at least half of this. He's a hell of a competitor. It was an honour to battle with him.

"I didn't really give myself much of a chance teeing off today, I thought six behind was going to be really tough to make up but my good play and Scottie's not-so-great play meant it was a ball game going into the back nine." 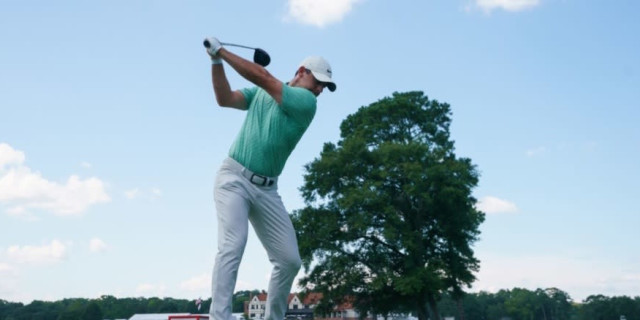 Four-time major winner McIlroy carded a four-under 66 to pip the world number one and the South Korean on 21 under.

Scheffler started the week with a six-shot advantage over McIlroy as players began the season-ending event on staggered scores, determined by their respective positions in the FedEx Cup standings.

After play was suspended during Saturday's third round because of lightning, Scheffler led by just one when play resumed on Sunday morning but extended his lead to six before the final round.

When the final round began later, the pair both bogeyed the first hole and Scheffler dropped further shots on the fourth and sixth.

McIlroy, meanwhile, birdied the third and picked up three more shots in succession from the fifth.

It set the tone for the day and McIlroy led by one by the time they got to the 18th tee. Both players his good drives but McIlroy pull-hooked his approach and could only make a par 5.

Scheffler could not take advantage, hitting the last of a series of poor bunker shots that meant the Masters champion also only parred the closing hole to sign for a 73.

His poor final round left him tied for second with South Korea's Im, who shot 66.

"It's the greatest place in the world to play golf, bar none, and I've played all over the world.

"Two of the best players in the world going head-to-head for the biggest prize on the PGA Tour and I hope everyone at home enjoyed that."

McIlroy said the FedEx Cup victory would help "soften the blow" after he was edged out at the 150th Open Championship, where he shared the lead after 54 holes, but finished third behind Australia's Cameron Smith.

"St Andrews was really hard for me. It was a tough one to get over," he said.

"This softens the blow a little bit. It doesn't make it that much easier to get over, but it's great to end the season on a high note like this."

Who Is Rory McIlroy?

McIlroy is a four-time major winner but his last one came in 2014. His victory East Lake was his 34th success and took his season’s earnings to more than $23m. He has won 22 times on the PGA Tour and 12 on the DP World Tour. His first professional victory came at the Dubai Desert Classic in 2009 when he was just 19 years old.

What's In The Bag - Rory McIlroy