Continuing its rich legacy in the game, Rolex will be present as the Official Timekeeper and Global Partner at the 2022 Presidents Cup, which will take place for the first time at the Quail Hollow Club in Charlotte, North Carolina.

The team competition is contested by the United States and an International selection comprising players from the rest of the world, excluding Europe. First held in 1994, the event has since been held biennially and alternates between venues in the U.S. and abroad.

For more than 50 years, Rolex has developed an enduring partnership with golf, one of the most successful between a brand and sport. The affiliation was established in 1967 when Arnold Palmer became the game’s first Rolex Testimonee. He was joined by close friends and fellow members of The Big Three, Jack Nicklaus and Gary Player.

Since then, Rolex has continued to strengthen those bonds, extending its support to every level of the game, including elite and amateur players, and all the Major championships and professional tours around the world.

Created and organized by the PGA Tour, the Presidents Cup is unique. No prize money is awarded and net proceeds are distributed to charities nominated by the captains, captains’ assistants and players. Since its inception, more than US$54.4 million has been raised for good causes around the world.

Renowned for its competitive spirit and diverse field, the Presidents Cup showcases golf’s finest talent in various playing formats, culminating with a series of one-on-one singles matches on the final day. The U.S. team has won 11 of the 13 editions to date, with one victory for the International team and one draw.

Designed in 1961 to capture the beauty and striking terrain of the Piedmont region, the Quail Hollow Club is primed for the arrival of thousands of passionate fans. Since its opening, the course has undergone a series of improvements, among them the modification of several holes in 1986 that was overseen by Palmer.

For this year’s event, the course has been rerouted, with the infamous “Green Mile” - holes 16, 17 and 18 - now playing as holes 13, 14 and 15. The rationale behind this reconfiguration was to ensure that matches are not completed before golfers reach this stretch and these classic holes remain in play. 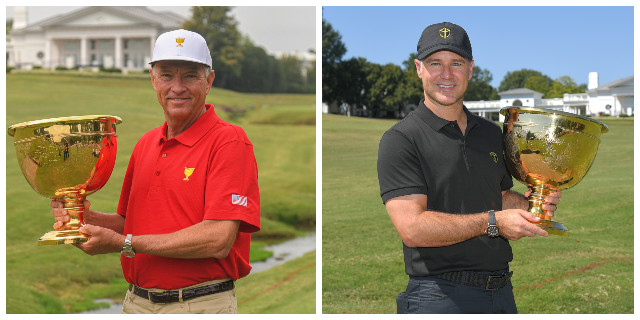 Ahead of the event, Immelman said:

“I have always loved playing in the Presidents Cup and it is a huge privilege to captain the International team at this year’s event. Developing a well-rounded, cohesive and representative team will be key to success at Quail Hollow. I made my assistants selections with this in mind and believe they will bring the perfect blend of leadership, experience and a deep understanding of what the Presidents Cup means and represents.”

Choi returns as a captain’s assistant for the third time, having previously served in 2015, when the tournament made its debut in his homeland, and 2019. He also competed for the Internationals in 2003, 2007 and 2011.

The U.S. team will be led by the experienced Davis Love III, who has won 21 events on the PGA TOUR, including a Major, the 1997 PGA Championship. He will be assisted by fellow Rolex Testimonee Fred Couples, a three-time winning captain of U.S. Presidents Cup teams and a two-time U.S. Ryder Cup team vice-captain. Couples also has a Major to his name, having won the Masters Tournament in 1992.

“For me, the Presidents Cup is always a highlight of the golf calendar. This year, I am particularly excited to be leading the U.S. team in my home state and partner with my close friend Fred Couples. His experience and track record of success at the Presidents Cup will be invaluable. It promises to be an amazing week and hopefully we can retain the Cup.”