THE Cazoo Open returns to the Twenty Ten Course at Celtic Manor, with a huge amount of attention on big-hitting Belgian Nicolas Colsaerts, who returns to action after battling illness.

It all started for Colsaerts after the DP World Tour Championship in Dubai last November. Colsaerts had been part of the Sky Sports commentary team for the season-ending event. All went fine, but throughout the week the Dubai-resident had been unable to shake the ominously bad feeling that had bothered him for maybe a month.

“My ankles doubled in size overnight,” he continues. “My best friend was staying with us. He was like, ‘Oh my God.’ So I went straight to the ER.”

A range of blood tests failed to provide an initial diagnosis, but after being sent home, Colsaerts was called back to the hospital for further examination. A CT scan revealed a lung one-third full of fluid. There were blood clots, too.

Eventually he was diagnosed with membranous nephropathy, which occurs when the small blood vessels in the kidney become damaged and thickened. Proteins then leak from the damaged blood vessels into the urine. There is no cure so Colsaerts has to manage the condition.

This is the fifth of six successive tournaments being staged in the UK, with the run coming to an end with the ISPS Handa World Invitational at Galgorm Castle next week. 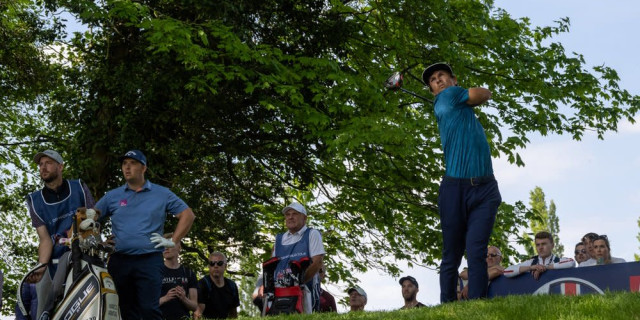 Denmark’s Thorbjorn Olesen, who won the British Masters in May, has continued his good form, finishing eighth at the Irish Open and tied 11th at the Cazoo Classic. After a troubled time, Olesen seems to have finally rediscovered the form and consistency that saw him claim a Ryder Cup berth, and he is clearly enjoying his golf again.

It is also about time that South Africa’s Brandon Stone contended for another title. One of the best swingers on the DP World Tour, his career has been dogged by inconsistency, but he finished in a tie for fifth at the Porsche European Open and was 15th at the BMW International Open.

That he has only won three times on the DP World Tour is one of golf’s mysteries. His most recent success came when he won the Scottish Open was back in 2018.

The Spaniard saw his overnight advantage disappear during a gripping day at Celtic Manor, with Elvira finding himself a shot behind with four holes to play and then one ahead until a final-hole bogey dropped him back to 16 under.

Elvira's one-under 70 forced him into a play-off alongside Justin Harding, who carded a final-round 65, where a two-putt par was enough to snatch victory when Harding three-putted the first extra hole.

"I thought I had it all pretty much under control," Elvira said immediately after his win. "To be honest, I got pretty nervous over the last couple of putts on the regular 18. I was calmer in the play-off than I was on the 18th.”

Thorbjorn Olesen won the British Masters in May and finished eighth at the Irish Open and tied 11th at the Cazoo Classic. The Dane is finally back to his best and will believe he can win again this week. Sweet-swing Brandon Stone battles inconsistency but the 29-year-old is finally showing some decent form this year and is long overdue a fourth DP World Tour success.

It was won in 2020 by Romain Langasque and last year by Nacho Elvira.

Celtic Manor is a monster, a par 71 measuring 7,503 yards, with a 613-yard par five as the finishing hole. With water hazards on half of its holes, the course presents many more memorable tests and risk-and-reward dilemmas. One of the features of the spectacular course is its variety with many of the early holes having a links-like feel with long rough and greenside swales, before the middle section, which reveals the full extent of the lake-lined challenge.

Brandon Stone. Something of an enigma

Victor Perez. On his day, a world-class putter

Nicolas Colsaerts. Thrilled just to be out there playing again

Nacho Elvira. Having a miserable season but will have positive memories

David Law. Another who struggles with consistency

Matthew Jordan. Has shown some flashes of form