WITH the world’s best playing in The Open Championship at St Andrews this week, the Barracuda Championship represents a chance for many of the sport’s lesser lights to gain some valuable FedEx Cup points.

And the field is a surprisingly strong one, with a number of Europeans and DP World Tour players looking to make a name for themselves in a tournament that is co-sanctioned with the PGA Tour.

Last year that man was Erik van Rooyen, who took advantage of a four-hole stretch that included two birdies and an eagle to vault himself into contention - and eventually the winner’s circle.

It was good enough for nine points under the modified Stableford scoring system used in this unique PGA Tour event. After finishing the front nine in the equivalent of four-under 32, van Rooyen played the back nine bogey free, earning six points for his three birdies to claim his first career PGA Tour win, defeating 2018 champion Andrew Putnam by five points.

However, there was some drama at the final hole. Holding a three-point lead, the South African only needed a bogey to clinch his win. Not one to shy away from playing aggressive golf, van Rooyen took out his driver, only to hit what he later described as “probably the worst shot I hit all week.”

The pull hook went into the trees left of the 18th fairway, but a lucky bounce sent his ball tumbling back into the fairway. From there, he hit a 7-iron and converted a closing birdie to set a tournament record with 50 points.

Looking to follow in his footsteps this week are former Ryder Cup players Alex Noren and Rafa Cabrera Bello, along with the likes of Ashun Wu, Sebastian Soderberg, Andrea Pavan, Joachim B Hansen, James Morrison, Matthias Schwab, Joakim Lagergren, the big-hitting Sean Crocker and Kiradech Aphibarnrat. Of course, all these players would rather be chasing the Claret Jug at the Home of Golf, but it was not to be. 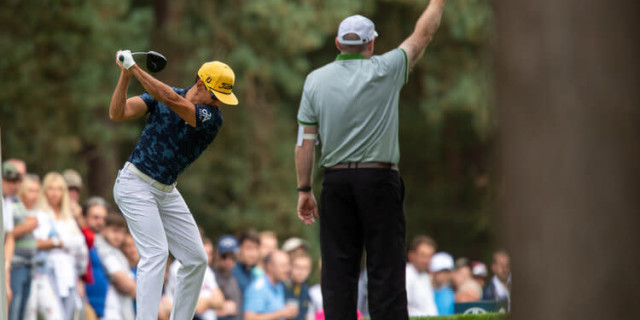 Perhaps the biggest surprise is that Noren did not make it to St Andrews. The Swede is a multipole winner on the DP World Tour but had lost his way over the past couple of years. But 2022 has seen something of a renaissance. He began the Scottish Open - his last chance to scrape into the field at the Old Course - ranked 67th in the world and 74th in the FedEx Cup standings.

Noren finished tied fifth at the Honda Classic and tied sixth at the Phoenix Open. He has missed six cuts on the PGA Tour this season but there have been six top-25 finishes. He is a streaky player and missed three cuts on the bounce at the PGA Championship, the Memorial and the US Open. But if his putter gets hot he can win on any golf course, and is capable of stringing together a lot of birdies.

Cabrera Bello won the Open de Espana in October - his first win on the DP World Tour for four years. He hoped it was going to signal a return to the sort of form that earned him a Ryder Cup spot but 2022 has been a shocker, missing the cut at the Soudal Open, Dutch Open, BMW International Open and Irish Open. He did make it to the weekend at the Scottish Open but was unable to secure a spot at St Andrews at a tournament he won in 2017.

Aphibarnrat is an unfulfilled talent, desperately looking to get his career back on track. The Thai golfer missed the cut in Scotland by a country mile. In 15 starts on the PGA Tour this season he has missed seven cuts and earned just $155,000. But just like Noren, he is a streaky player who could rediscover his best form in an instant. He is a four-time winner and here’s the thing - two of those victories came at alternative scoring tournaments, the Perth Super Sixes and the Paul Lawrie Matchplay. He can make birdies in bunches and the stable ford format may just suit him.

Chez Reavie has missed an awful lot of cuts this season but his recent form has been pretty encouraging, with top-15 finishes in his past six starts. And Chesson Hadley has also turned things around in recent weeks, recording successive top-10 finishes.

Keep an eye on Germany’s Stephan Jaegar, who enjoyed an astonishing  spell on the Korn Ferry Tour last season, with two victories, four-runner-up finishes and a third. He has struggled to make an impression on the PGA Tour this year but it only takes one good week to turn everything around.

Tahoe Mountain’s Old Greenwood Course meanders through 600 acres of towering pine trees. Designed by Jack Nicklaus, it features several water hazards and narrow fairways.It is a par 72 measuring 7,512 yards. It is 6,000 feet above sea level, and that means these goys will be hitting the ball even further than normal.

Alex Noren has battled his way back to some kind of form this season and will be relishing the stableford format. Chesson Hadley missed eight cuts on the trot earlier in the season but has stuck at it, finishing fifth at the Travelers Championship and tied 10th at the John Deere Classic.

Rafa Cabrera Bello has won on the DP World Tour this season and showed some form at the Scottish Open - it is time he added a PGA Tour success to his resume.

Alex Noren. Having a decent year

Rafa Cabrera Bello. Could do with a big week

Chesson Hadley. Has found something in recent weeks

Sebastian Soderberg. Been showing flashes of his old form

Daniel Gavins. Looking to kick on