THERE is huge excitement ahead of the 150th Open Championship at St Andrews, with a record crowd of 290,000 guaranteed at the Home of Golf to see if Collin Morikawa can successfully defend the Claret Jug.

The odds are stacked heavily against him doing so. The last man to do so was Padraig Harrington, who won in 2007 and 2008, with Tiger Woods also achieving the feat in 2005 and 2006.

There will, of course, be a huge focus on Woods. He made the cut on his competitive return at The Masters in April and did so again at the PGA Championship before withdrawing after 54 holes. He did not compete in the US Open at Brookline, saying that he wanted to give his body time to recover before heading to St Andrews.

It would be all too easy to write him off. But two of his victories in The Open came at St Andrews and he did so in remarkable fashion in 2000 with a winning total of 269. Remarkably, he played 72 holes without finding a single bunker all week.

Woods has already completed one astonishing comeback, winning The Masters in 2019, and the Old Course will suit him once again because it is so flat. Can he win? Of course he can. Will he win? That is an entirely different matter.

Rory McIlroy will once again bid to end his major drought, which now stretches back to the 2014 PGA. The Northern Irishman will be praying for calm weather this week.

Back in 2010, when he was just 21 years old, he reduced the Old Course to 63 blows with a glorious display of shot-making on the opening day. But on the Friday the rain came hammering down and the wind blew. McIlroy finished with an 80 - 17 shots worse than his opening effort.

He would be the first to admit that his towering drives and iron play are not suited to the wind, so if it does blow you can write off his chances. 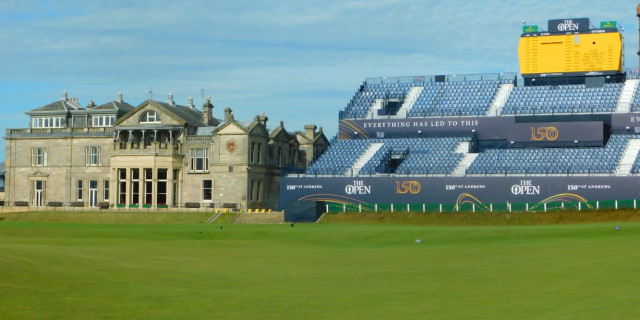 Jon Rahm is a different matter. He is a brilliant shotmaker, able to play at his best no matter the conditions. He is actually having a fairly quiet year but showed in Mexico that he is still capable of beating anybody when he is at his best. He has struggled on the greens this year and that could be a problem at St Andrews with all its huge double greens.

World number one Scottie Scheffler continues his dream year. It is still hard to believe that at the beginning of 2022 he had not recorded a single victory on the PGA Tour. But boy has he made up for it. It all started in February with his victory at the Phoenix Open and he followed it with another win at the Arnold Palmer Invitational, then he claimed the WGC Dell Technologies World Matchplay and The Masters.

But it is not just his victories that have caught the eye. He has finished second three times, including a joint runner-up at the US Open. His only blip came at the PGA, where he missed the cut.

There will be a huge amount of attention on US Open champion Matthew Fitzpatrick. His victory at Brookline had been coming all year. It was his eighth top-10 finish on American soil this season and he should have won the PGA Championship.

The man from Sheffield tips the scales at 11 stones but he has worked tremendously hard to add distance from the tee - and has done so without changing his swing. He is a fabulous wedge player and one of the best in the world with a putter in his hands. And, of course, he now possesses a huge amount of self belief.

But the best British hope may well be Tyrrell Hatton. He has twice won the Alfred Dunhill Links Championship at St Andrews and has been in decent form all season, both on the DP World Tour and the PGA Tour. He was fourth in the Dubai Desert Classic in January and made the cut at all three majors, with a best of tied 13th at the PGA Championship. He also finished second at the Arnold Palmer Invitational and has missed just two cuts in 14 starts in the USA.

And speaking of course specialists, Louis Oosthuizen adores the Old Course. He won The Open in style back in 2010 and nearly repeated the feat five years later, losing in a three-man playoff to Zach Johnson. Oosthuizen had an incredible run in the majors in 2021, finishing tied 26th at The Masters, tied second at the PGA, second at the US Open and tied third at The Open. He has, of course, been suspended by the PGA Tour after joining the LIV Series but he showed some sparkling form when finishing tied eighth in the BMW International Open in Munich.

Jordan Spieth, the 2017 champion, just missed out on that playoff seven years ago. His struggles have been well documented but he is now back to his best. It is hard to believe that he is still only 28.

For the first time in his career he missed the cut at The Masters this year, but he won the RBC Heritage on a course that really shouldn’t suit his game and finished second at the AT&T Byron Nelson and AT&T Pebble Beach Pro-Am.

Spieth still hits the odd shot that would embarrass an 18-handicapper but he is one of the gutsiest golfers on the planet and would love nothing more than to win at the home of golf.

There is a perception that Morikawa is having a poor season. It is true that he has yet to win but he was fifth at The Masters and tied fifth at the US Open. He has twice been runner-up and has seven top-10 finishes in 14 starts on the PGA Tour.

The 25-year-old American loves tough golf courses and his focus is on the majors. He is not the greatest putter but he is likely to be there or thereabouts.

Xander Schauffele will arrive with huge expectations after winning the Travelers Championship and the Scottish Open - in between, he also claimed the JP McManus Pro-Am at Adare Manor. Can he make it four in a row? It is a big, big ask.

Will Zalatoris is another big-time player. He has yet to break his duck on the PGA Tour, but consider this: he has played in nine majors and has finished second three times, tied sixth  twice and tied eighth once. He has missed two cuts and withdrew from last year’s Open because of injury.

This year he has twice lost in playoffs, to Justin Thomas at the PGA and to Luke List at the Farmers Insurance Open at Torrey Pines.

Zalatoris is not the best from six feet and in but every other part of his game is world-class, and I believe that he is going to win his first major at St Andrews.

The Old Course is a par 72 measuring 7,297 yards. It is a traditional links course with all the trouble on the right-hand side but the best line on almost every hole is from the right. It features lots of punishing pot bunkers and huge double greens. If the wind fails to blow expect to see a winning score of around 270 - or lower.

Will Zalatoris is a freak of nature who has an astonishing record in the majors. He withdrew from last year’s Open at Royal St George’s because of injury but showed that he has the game to cope with links conditions. He has yet to secure his first win but it would surprise nobody if he continues his excellent 2022 form by picking up the Claret Jug. Tyrrell Hatton may not be everybody’s cup of tea but he is a course specialist and if he can keep his temper in check he is likely to be there or thereabouts. Collin Morikawa knocks off top-10 finishes for fun and is a big-time player who contended at both The Masters and US Open this season. It would be a surprise if he is not in the frame at the Old Course. Xander Schauffele will also like his chances after adding the Scottish Open to his victory at the Travelers Championship and the American is among the favourites on Betway. And then there is Matt Fitzpatrick, who US Open victory crowned what had already been an excellent year on the PGA Tour for the Englishman.

Collin Morikawa. Determined to mount a proper defence of his title (25/1)

Will Zalatoris. A maiden win this week would surprise nobody (22/1)

Robert MacIntyre. Should be inspired by playing in front of a passionate Scottish crowd (66/1)

Christiaan Bezuidenhout. On his day, he can beat anybody (80/1)

Sky’s coverage of The Open is as comprehensive as it gets - you will see everything from the opening tee shot on Thursday and the final winning putt holed on Sunday. In the build-up to the tournament, Live At The Open Zone will see the world’s best golfers joining Nick Dougherty to discuss their chances and demonstrate how to play specific shots. BBC2 will show daily highlights, and there will be live coverage of the tournament on BBC Radio 5 Live, hosted by the excellent Mark Chapman.

Over the years the weather has been a huge factor at St Andrews. The coastal breeze is the Old Course’s only real defence and the good news for the players is that weather is predicted to be both calm and dry.

The Open Preview article has been written in collaboration with Betway