IT IS three years ago since the Canadian Open was last staged. The pandemic saw the tournament being scrapped in both 2020 and last year.

Rory McIlroy won in 2019 and heads to St George’s Golf Club in Toronto as defending champion, looking to fine tune his game ahead of next week’s US Open.

And he will be joined by a world-class field, led by recent PGA champion Justin Thomas. Thomas is a 15-time winner on the PGA Tour and will be competing in his second Canadian Open. Apart from his victory at Southern Hills, he has enjoyed a further seven top-10 finishes in just 13 starts and is fourth in the FedEx Cup standings.

Scheffler is making his first appearance in Canada. The 25-year-old captured the WGC-Dell Technologies Match Play with a 4&3 win over Kevin Kisner. After that triumph, Scheffler became the 25th man to become world number one.

Scheffler only broke through for his first PGA Tour win at the Phoenix Open in February before winning the Arnold Palmer Invitational in March. He then added the WGC and The Masters to land his first major before losing out in a playoff at the Charles Schwab Challenge at Colonial.

It took Scheffler just 92 starts to reach the summit. Only Tiger Woods (21) and Jordan Spieth (77) needed fewer starts to ascend to the top of golf’s ranking.

Scheffler only turned pro in the summer of 2018 and earned Korn Ferry Tour Player of the Year honours the next year thanks to two victories. Eighteen months ago, he was named PGA Tour Rookie of the Year.

He started the final round sharing the lead with Americans Matt Kuchar and Webb Simpson. He started his round by lipping-out a chip for eagle on the first hole, en route to making birdies at four of his first five holes. With the win the Northern Irishman claimed his 16th PGA Tour title.

“It’s been a while since I played like this and sort of put my foot down, but it was so nice to do it,” said McIlroy. “I’m very proud of what I’ve done here.” 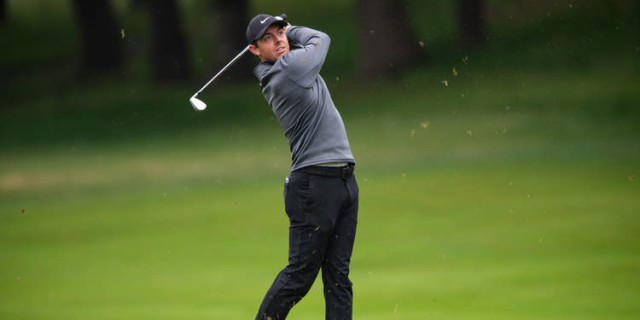 McIlroy became only the sixth player to win the career Triple Crown, having won the U.S. Open in 2011 and The Open Championship in 2014. He joined an exclusive club that includes Tommy Armour, Walter Hagen, Arnold Palmer, Lee Trevino and Tiger Woods.

“The reception from the Canadian crowds was incredible,” added McIlroy. “They couldn’t have been any better. They’ve been so welcoming all week. I can’t wait to come back.”

He became the first golfer to win the Canadian Open on his first attempt since Chez Reavie in 2008 and the first European to capture the title since Sweden’s Carl Pettersson in 2010.

Ireland’s Shane Lowry and American Web Simpson finished tied for second at 15-under par 265 for the tournament. Some weeks later, Lowry would go on to win The Open at Royal Portrush.

The Canadian Open is included in The Open Qualifying Series. Up to three players who are not already exempt will places in the 150th Open Championship at St Andrews.

St George’s Golf and Country club was designed by Stanley Thompson in 1929. It is a tree-lined course that measures 7,025 yards and is a par 71. It is an unforgiving layout that demands accuracy from the tee. And there are a LOT of bunkers to be avoided.

The week after winning the PGA Championship, Justin Thomas missed the cut at Colonial. But he will not be bothered by that rare blip. He has enjoyed a host of good finishes this season, including fifth at the Tournament of Champions, third at the Valspar, tied eighth at The Masters and tied fifth at the Byron Nelson. Rory McIlroy continues to flatter to deceive but it surely can’t be long before he wins again. His season’s highlight came when he won the CJ Cup. He also finished second at The Masters, fifth at the Wells Fargo and eighth at the PGA Championship.

Scottie Scheffler. Looks like winning every time he plays

Justin Thomas. On the crest of a wave

Scottie Scheffler. Hugely impressive in everything he does

Rory McIlroy. Would love to tune up for the US Open with a win

Matthew Fitzpatrick. Another week, another chance to break his duck

Brandt Snedeker. Has shown some flashes of his old form recently