WHEN all is going well and your swing is in sync there is no better sport than golf. We all know the feeling we get when we strike a sweet drive, a wedge to three feet or hole a tramliner of a putt for a birdie. It’s those good shots that keep bringing us back to try again.

But golf can also be the most unforgiving of mistresses. Just when you think you have it cracked, it has a habit of biting you in the backside.

Here we look at the worst shots in the game:

Is there a worse shot in golf? Yes, actually, and more of that later. The topped drive is a killer - and it usually happens when there is 100 yards of knee-high rough between the tee and the fairway. And, of course, a top will usually only travel about 50 yards so not only do you have to cope with the embarrassment of striking the ball almost no distance but you will probably also not be able to find the ball, so you have to trudge back to the tee and face the same shot all over again.

The tour pros call it a power fade, and they somehow manage to get the ball to travel in excess of 300 yards with a gentle left to right movement that sees the ball land slap bang in the middle of the fairway. For you and I, the power fade tends to involve the golf ball moving at least 50 yards from left to right, finishing in the cabbage. And flying 180 yards!

Is there a more destructive shot? Again, yes, and, again, more of that later. Most of us dream of hitting a draw with the driver in hand. When you get it right it is the most satisfying shot in the book as a draw flight will always give you plenty of run. But the duck hook is a horror show when the ball barely gets off the ground and shoots off like a boomerang, usually never to be seen again. 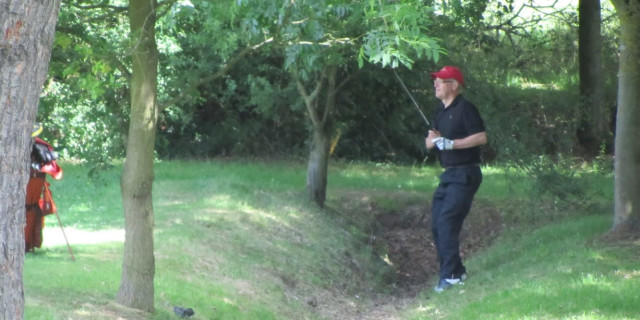 Recovery From The Trees

Trees are meant to be more than 90% air. That may be the case, but it is the other 10% that tends to get in the way. You have hit your tee shot into the woods and you have spotted a gap. When the pros hit the trees their ball almost always either bounces back into play or they manage to thread it through that gap. But for the average club golfer, that gap you have seen tends to shrink when you strike the ball, resulting in your ball hitting a tree trunk and either disappearing even deeper into the forest or coming straight back and hitting you between the eyeballs - and costing you a penalty shot!

This is the one that really gets into your head. Everybody misses tiddlers from time to time, and I do mean everybody! And once you have missed a couple you start to see breaks that aren’t really there. If you suddenly find you can’t hole a short putt to save your life, it might be time to think about changing your putting grip. Or your putter. Or finding another sport!

Plugged in a Bunker

For club golfers, finding your ball plugged in a bunker is our worst nightmare. Even the very best in the world struggle with this one, so what chance do we mere mortals have? It’s a question of hitting the ball as hard as you can - and either moving it a couple of inches or seeing it screaming across the green into another bunker

How difficult is it to rake a bunker? Based on the evidence witnessed at most golf clubs it appears to be very difficult. It has happened to each and every one of us. You hit your approaching a greenside bunker and arrive at the ball to discover it sitting slap bang in the middle of a huge footprint. See “plugged in a bunker” for what happens next!

This is the iron shot that usually occurs when the ground is rock hard and the vibration from the resultant shot travels through your fingers, up your arms, down your spine and finishes up in your toes.

And finally, the worst shot in golf! There is a theory that if you hit a shank it is because your golf swing is almost perfect. Yeah, right! The worst thing about the shank is that it strikes without warning. And then, like a contagious disease, every time you stand over the ball with an iron in your hand, all you think about is the absolute certainty that the ball is going to come off your club at right angles. If you suffer a dose of the shanks the only known cure is to head to your teaching pro - as soon as possible!

The Worst Shots Played By The Best Golfers