Paul Azinger Puts His Foot in it With European Tour Comments

PAUL AZINGER has built a reputation as a fine golf analyst and commentator, a man who knows what it takes to win at the highest level and who masterminded a rare US Ryder Cup victory. But he has some way to go when it comes to knowing how to win friends and influence people.

Yes, he captained the US to a win in the Ryder Cup. Yes, he won the US PGA Championship. And yes, he defied the odds to beat cancer and return as a winner.

But he really needs to brush up on his diplomatic skills after having a dig at Tommy Fleetwood’s failure to win the Honda Classic. In the wake of Fleetwood’s third-place finish, he had this to say on NBC: “There’s a lot of pressure here. You are trying to prove to everybody that you’ve got what it takes. These guys know, you can win all you want on that European Tour or in the international game and all that but you have to win on the PGA Tour.”

He is talking here about a man who has twice finished in the top five at the US Open, who was runner-up to Shane Lowry in The Open Championship at Royal Portrush in 2019 and who won all four matches in partnership with Francesco Molinari when Europe thrashed the USA at the 2018 Ryder Cup. That, by the way, would be a US team packed with players who ply their trades on the PGA Tour. And he is talking about a man who will, without the shadow of a doubt, win on the PGA Tour before very much longer, maybe even this week at the Arnold Palmer Invitational.

A good example of why I wouldn't advise watching PGA Tour golf with the sound on pic.twitter.com/rQEHjY5cTa

Azinger also had a pop at Lee Westwood, a man who has won 44 times around the world and who remains one of the best golfers on the planet.

“Westwood took offence when asked about about the fact that he had only two wins on the PGA Tour and said he’d won 44 times around the world,” said Azinger. "But it’s not the PGA Tour. And they know that, and Tommy knows that and it puts a little bit of pressure on Tommy. This is where they want to be.

“They want to prove that they can win at this level. Even some of the obscure names that have won here, like a Mark Wilson and you think, man, Mark Wilson won at PGA National.”

Azinger seems to have forgotten that Europe have developed a nasty habit of handing out a beating to America’s finest at the Ryder Cup, home and away. He also forgets or ignores that the likes of Fleetwood and Westwood actually play most of their golf on the European Tour. And he has completely ignored Fleetwood’s astonishing record when it comes to making 36-hole cuts. For the record, he played 72 holes in every tournament he played in 2019, and has continued that record in 2020. On both the European and PGA Tours. 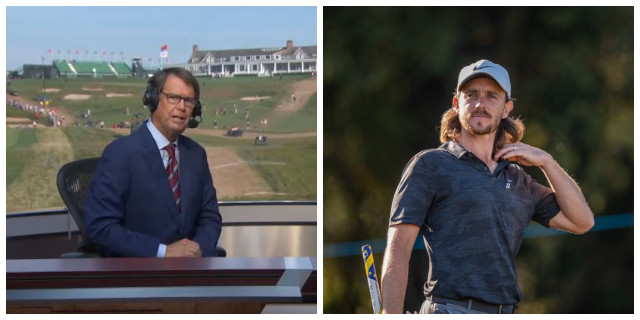 Unsurprisingly, many of Europe’s best golfers have taken exception to Azinger’s ridiculous comment. And Ian Poulter has led the way, describing Azinger’s comments as “embarrassing”.

Poulter wrote on Twitter: 'I like @PaulAzinger a lot. And get on with him great. But Paul please do not condescend or disrespect the @EuropeanTour and our players like that. We have slapped your a*** in Ryder Cup for so long. I know you captained a win but seriously that was embarrassing today.’

Scottish golfer Richie Ramsay was also outspoken in his criticism: "Pretty disrespectful this to other tours,” he tweeted. "Sometimes are strength of field is stronger and playing internationally will undoubtedly make you a better player and MOST a better person. More variety of courses to challenge you.”

This is a view that Patrick Reed clearly subscribes to. He is a full member of the European Tour and has made it clear that playing all over the world has made him a better golfer. Oh, and he leads the Race to Dubai. And Brooks Koepka, a man who has won four majors, says he wouldn’t be the golfer he is had it not been for the time he spent playing in Europe.

Spanish player Gonzalo Fernandez Castano said: "Is that the same Azinger who last year called Molinari’s putt at Bay Hill’s 18th ‘the most important putt of his career' months after he won The Open?’