Adam Scott ended a near four-year title drought as he held off the challenge of New Zealand’s Michael Hendry in a thrilling finish to win the Australian PGA Championship for a second time. But the veteran Australian was made to work hard for his victory. The 2013 champion, who led going into the final round, produced a closing 69 to win by two shots but he was pushed all the way by Hendry, who finished alone in second after closing his fourth round with back to back bogeys.

Scott’s last victory came at the WGC Cadillac Championship in March 2016. He remains one of the best ball strikers in the game, but his struggles on the greens have been well documented and he has faced a long and tough battle since the broomhandle and belly putters were banned. But throughout it all he has refused to back away and there have been several superb performances in 2019. He produced nine top-10 finishes on the PGA Tour this year. All that was missing was a win, and it finally came in his native Australia. 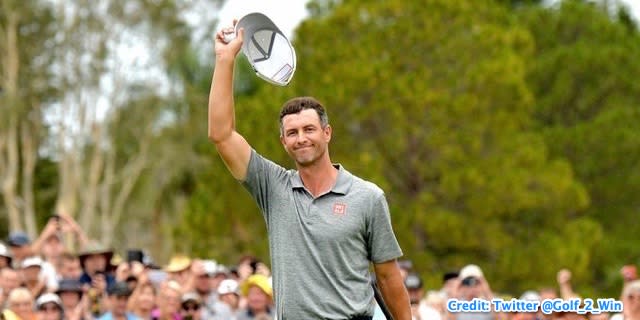 “I am absolutely stoked with this,” said the 39-year-old afterwards. “It’s been a long time coming. It’s been a long time between drinks for me and maybe only once or twice did the thought cross my mind that I’ll never win again. It’s very difficult to win. I’m on the wrong side of this age thing now where these young guys are really good. I played some pretty good golf a couple weeks this year and fell short. You know, record setting scores. The courses are getting tougher, guys are playing good. Just being all right doesn’t really get you in, you’ve got to be pretty much sensational.”

The momentum swung Scott's way when he followed a birdie on the 14th with a magnificent eagle at the 15th to move two shots clear. But Hendry still wasn’t finished and reduced the deficit to a single stroke with a birdie at the 16th before carding a bogey on the very next hole. Home favourite Scott looked to have let Hendry back in when he missed the green at the 17th but he saved his par with a brilliant recovery shot.

And when Hendry carded another bogey on the 18th, former Masters champion Scott secured his 11th European Tour victory despite dropping a shot on the last.

Scott began the day with a one-stroke lead and stretched his advantage to two after a birdie at the opening hole. It took him to 11 under. However, a run of pars allowed the chasing pack to close the gap, and when he dropped his first shot of the day after finding water at the eighth, he found himself in a share of the lead. Incredibly, Scott trailed when Hendry made a birdie at the ninth to take the outright lead.

The Australian closed out his front nine with a four-foot birdie putt to regain a share of the lead but Hendry's birdie from around 15 feet at the 10th saw him move back in front.

Scott kept his cool, making a vital par save after getting into trouble off the tee at the 12th to stay in the hunt. And he joined Hendry in the lead again with a  10-foot birdie putt at the 14th before taking a two-shot lead with an eagle from a similar distance at the par-five 15th.

With Hendry's challenge fading, there was little pressure on Scott as he stood at the 18th tee, and he made a bogey to finish the week on 13 under and return to the winner's circle for the first time since 2016.

The victory sees Scott climb to 13th in the world rankings - a measure of the consistent form he has shown. He pointed to his par save at the 12th as being the turning point. His drive finished beneath trees to the left of the fairway, stuck in a twisted mess of roots that forced him to take a penalty drop. But he hit a wonderful shot to six feet and holed the putt for par.

“Six, seven and eight I thought just made the day hard for me because I had an opportunity to get a few in front and make it hard for everyone else, but I didn’t do well on those holes,” Scott said. “And then the 12th was a great save. As good as the eagle on the 15th was, the par on the 12th was equally good.”