WHEN the likes of Rory McIlroy, Rickie Fowler, Justin Thomas, Matt Kuchar, Kevin Kisner and Henrik Stenson enter your tournament it can only mean one thing - The Open Championship is just around the corner. Fowler loves the Scottish Open, winning it in 2015 and never finishing outside the top 10 since making his debut in 2014.

And he is back and hungry to win the season’s third Rolex Series event, being held at the Renaissance Club near North Berwick. The 2015 champion will be looking to reproduce the form which saw him claim the title just a few miles down the East Lothian coastline at Gullane Golf Club, where he birdied three of the final four holes to see off compatriot Kuchar by a single shot.

He has already tasted victory on the PGA Tour in 2019, capturing his ninth career win at the Waste Management Phoenix Open in February. With the Scottish Open taking its traditional spot in the week before The Open Championship he will be hoping that a strong performance at The Renaissance Club can translate into his first major title at Royal Portrush. 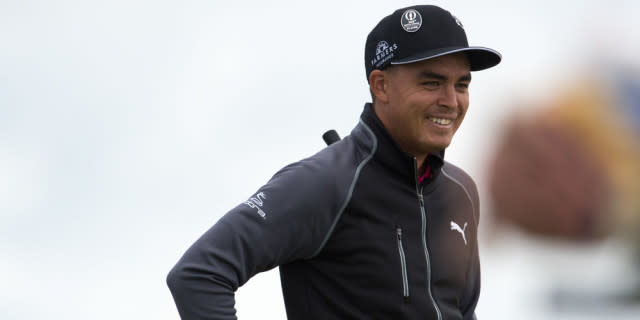 Fowler said: ‘’I’m looking forward to returning to Scotland for the Aberdeen Standard Investments Scottish Open. I have great memories from this tournament, particularly of my win at Gullane in 2015, and with fantastic courses and knowledgeable fans, I’m always excited to play. It’s a fun week but it gives the tournament extra edge to have The Open the following week. I know that a lot of players have won The Open after playing in Scotland so it’s good preparation as well as being a great week of competition in itself.”


The tournament will be played for the first time at The Renaissance Club - which was founded in 2008 and nestles on 300 acres along the Firth of Forth - with a prize fund standing at a mouthwatering $7m.

McIlroy attracted a huge amount of criticism when he announced that he wasn’t going to play in the Irish Open. He said that it didn’t fit in with his preparations for Royal Portrush. He said that he didn’t want to play three weeks on the trot, although he has done so several times already this season. When all is said and done, the 30-year-old Northern Irishman must do whatever he thinks is best to give him a realistic opportunity to end his major drought, which now stretches back almost five years. He will be under enormous pressure from the passionate Irish galleries to deliver the goods at Portrush, so he can be forgiven for choosing instead to complete his preparations in Scotland.

McIlroy has won two big tournaments already in 2019 - the Players Championship and the Canadian Open. But his performances in the three majors have caused him frustration. He simply hasn’t been able to contend at The Masters, US PGA Championship or US Open. It is scarcely credible that McIlroy has still only managed to win four majors. When he is on song there is no doubt that he is the most naturally gifted golfer on the planet. There is a school of thought that he now simply tries too hard when it comes to the majors.


He would be the first to admit that he is not a huge fan of links golf, especially if the wind blows. McIlroy plays the game with a towering ball flight and usually comes to grief when it blows - as it usually does on the coast. He needs to find a way to cope with those conditions and, more than anything else, he needs to arrive at North Berwick and at Royal Portrush with the putting stroke that served him so well when he walked away with the Canadian Open.

It will be interesting to see what sort of reception Kuchar gets from the Scottish fans. He has made the headlines this season for all the wrong reasons. There was the well-documented farce when he paid a local caddie a pittance, there was the row with Sergio Garcia at the WGC Match Play and there was a rules rumpus. It is such a shame because Kuchar is one of the most likeable, unassuming golfers on the PGA Tour. Through it all, however, he has continued to produce the best golf of his career. There have been two victories and a host of top-10 finishes. And he knows that he has the game to do well on links courses.

Thomas is striving to rediscover his best form as he continues to recover from a wrist injury that sidelined him earlier in the year. Surprisingly, he has struggled for confidence since returning to action, and it appears to have impacted upon on all parts of his game. Normally one of the best drivers of a golf ball in the professional game, he has battled to find fairways since returning. It means he has had to hit a lot of second shots from the rough. It has put added pressure on his short game and, to date, he hasn’t been up to the task. Of one thing you can be certain, however - Thomas will have been working furiously hard to iron out the kinks. Like his great friend Jordan Spieth, he is simply too good to continue struggling for much longer.

Keep an eye on Kevin Kisner too. The American never looks like he is enjoying himself on the golf course (why do so many top sportsmen find it so difficult to smile?), but he is a massively underrated player. He has only won three times on the PGA Tour but he contends more often than not, and he finished in a tie for second behind Francesco Molinari in The Open at Carnoustie last year and had serious opportunities to win. And one of those three victories came earlier this year when he defeated Kuchar to win the Dell World Matchplay Championship. He didn’t smile very much that day either.

It is also worth mentioning that a special 36-hole tournament for Golfers with Disability is being played alongside the Scottish Open. Boasting a field of 10 golfers it continues the European Tour’s drive for inclusivity within golf as players tackle the same course setup as the professionals. The season-ending DP World Tour Championship, Dubai will host a second tournament at Jumeirah Golf Estates. The events in Scotland and Dubai will be run in conjunction with the EDGA (European Disabled Golf Association).

Scoring for both tournaments will feature on the European Tour’s website and App for fans to follow, while highlights of both contests will form part of the world feed broadcast. The winner in Scotland will also take part in the main prizegiving ceremony on Sunday afternoon.

Keith Pelley, Chief Executive of the European Tour, said: “It was one of the proudest moments of my time so far at the European Tour to announce that we would be working alongside EDGA to offer golfers with a disability the opportunity to play competitive tournaments alongside two of our most high-profile events.

“I am delighted to welcome the initial nine players into the field for the EDGA Scottish Open, and I have no doubt that they will relish the test at The Renaissance Club on July 13 and 14, over the weekend of the Aberdeen Standard Investments Scottish Open.


“This event in Scotland is a watershed moment, as we work, alongside the EDGA, towards our aspirational goal of a ‘Golfers with Disability World Tour’ by 2021.”

EDGA President and IGF Head of Disability and Inclusion Tony Bennett said: “The announcement of these two exciting events in Scotland and Dubai, in collaboration with the European Tour, is already proving to be a game changer. Golf has the potential to be the most inclusive game of all, and we have seen a rapid increase in interest for the integration of individuals with disability into participation and competition programmes.

"As we prepare for the EDGA Scottish Open, we have already seen demand for a range of new initiatives, including school awareness programmes, a pop-in women’s event at the Home of Golf, St Andrews, demonstration events in rehabilitation centres, and of course more applications for national and regional tournaments. These developments indicate the reach that the European Tour has, and the growing interest from people of all abilities and from all backgrounds in the game."

Rory McIlroy. Looking for a good week before Royal Portrush

Rickie Fowler. Has a great record in this event

Rory McIlroy. Let’s hope he’s got his putting boots on

Kevin Kisner. Go on Kev, give us a smile

Matt Kuchar. What sort of reception will he get?